Relationships are defined as “an emotional connection or association between two people” (Oxford). What is considered healthy in a relationship can be found with mutual respect, trust, honesty, good communication, understanding, and self-confidence (Characteristics). However, there are also qualities in a relationship that can be defined as unhealthy. They include characteristics such as hostility, disrespect, dishonesty, and dependence (Characteristics).  Sandra Cisneros subtly addresses this concept of unhealthy relationships in her story “Bien Pretty”. The story is set in the perspective of a woman named Lupe who moved from San Francisco to San Antonio, Texas to get away from a previous relationship. In Texas, she meets a man by the name of Flavio Munguía Galindo, the prettiest man she ever saw.

After an infestation of cockroaches resulted in her calling the company Flavio worked at, they officially start to talk and develop a relationship stemmed from Lupe’s asking of Flavio to be her model for her interpretation of the Prince Popocatépetl and Princess Ixtaccíhuatl volcano myth (Cisneros 144). Throughout the tale, Cisneros portrays an insalubrious relationship between the couple and the effects that unhealthy love may have upon the parties involved.

As their relationship progressed, and Flavio started modeling for Lupe, they grew into being more than just friends. Unfortunately, this started the downhill tread to what is considered “healthy” in a relationship. Disrespect is a trait seen often and is defined as one who “makes fun of the opinions and interest of the other partner” (Characteristics). This is the top sign of their relationship being toxic, as it is their most commonly found mannerism. For example, one instance shows Lupe and Flavio discussing a topic and Lupe is incredulous, borderline disrespectful, of Flavio’s take on the matter.

Lupe goes in depth about complementary forces such as male/female, yin/yang, fire/water, but when Flavio interjects with his own understanding of it, Lupe is skeptical of Flavio’s take (Cisneros 149). The interaction between this dialogue shows that Lupe was critical about Flavio’s interpretation of her disposition and said as such. Flavio gets defensive but then the topic was dropped and the scene changed. Later on, more glimpses of disrespect are shown. At one point, the couple is having dinner while soft music plays in the background. After the meal, Flavio jumps up with the intention of dancing so he rolls back the rug and demonstrated several dances to Lupe, and the way that the la habanera, el fandango, and la milonga contribute to the birth of el tango (Cisneros 151). These were the dances his grandmother had taught him and to show them to Lupe seemed to be a largely personal thing to share. Flavio even went to his truck to get a different soundtrack so he could demonstrate more dances. Eventually Lupe asked him if he “knew any indigenous dances, like el baile de los viejitos?” (Cisneros 151). The comment told a tale of boredom and indifference shown by Lupe about the activity. Flavio simply rolled his eyes at Lupe and that was the end of their dance lesson, cut off by insensitive questions coupled with a sensitive subject.

There is also hostility in their bond. Hostility in a relationship is defined as when one dating partner picks a fight with or antagonizes the other dating partner (Characteristics). In one scene, Lupe addresses Flavio’s fashion sense and the way he dresses, she put him down when she said “What you are, sweetheart, is a product of American imperialism” (Cisneros 151). He retaliates in a hostile manner by bringing up Lupe’s insecurities: her lack of Mexican blood (Cisneros 152). He continues by stating that he had no need of dressing in a sombrero and sarape to show he was Mexican, that he knew who he was as a person without hiding behind a wardrobe (Cisneros 151). Lupe wanted to strike in turn, but because of the low blow, she could only retaliate with a weak slur, being too full of sudden insecurities to really lay into him.

Another large component viewed as unhealthy in a relationship is dishonesty. Flavio lied to Lupe from the start.

He led her to believe that he was a single gentleman, available to be with but in actuality the man had two wives. Lupe only found out about this development when Flavio sat her down one day and told her he had to go, that he had family obligations. When pressed, he mentioned those obligations as being his sons (Cisneros 156). The entire relationship was based on a lie not only because he was married, but he had children from these marriages as well. With that stunning blow, he casually left Lupe’s life and never went back.

Lupe had changed over the course of their whirlwind romance. She had gone from being a confident woman, comfortable in her own skin to a mere fraction of that person. Even though she was part of the problem, when Flavio left she was no longer as self-assured in her life. Flavio had taken a part of her when he had left. At one point Lupe was looking at her reflection with disgust, “When I look in the mirror, I’m ugly. How come I never noticed before?” (Cisneros 160). This passage eludes to the fact that Flavio helped inspire confidence in her image, but with him gone all she could see in herself was unpleasantness. She even had trouble with her artistic side, the paint was giving her headaches and she had lost her muse so she could not bear to look at the canvasses that boasted the picture of Flavio (Cisneros 161).

Weeks passed and slowly Lupe started recovering. She turned away from living her days watching telenovelas and took up her project that drew her to Flavio in the first place. The volcano myth of Prince Popocatépetl and Princess Ixtaccíhuatl. Instead of the princess lying prone on the ground, Lupe drew her as the one observing the sleeping body of the prince (Cisneros 163). She had changed the interpretation to show that a woman can be strong and fierce. That even though man was present, a woman could survive without one. 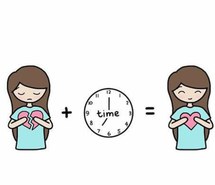 Lupe had been in the giving and receiving end of a broken relationship and yet was healing. There were good times and bad times but she was taking inspiration from the birds around her. They chatter in the sky as every day ends, they have no thought of future or past, they’re just living the now (Cisneros 165). Lupe embraced her experience and lived every day like it was never yesterday and never will be again tomorrow. This story shows that a person can make it out of an unfortunate experience of unhealthy relationships and become more emotionally mature, despite the circumstances.