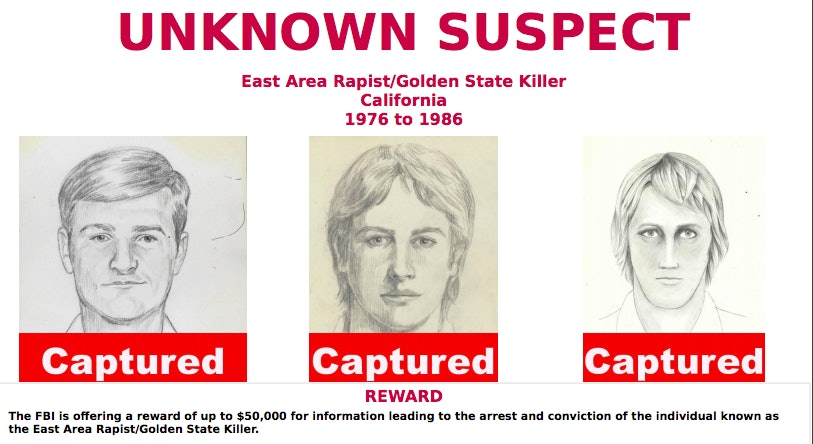 Cohen , Jeffrey. “Monster Culter(Seven Theses)” English with Mr. Tuttle, ,English with Tuttle scholar.google.com/citations?user=nrn1HokAAAAJ&hl=en.
The seven theses are about defining a monster and how a monster is created. We create monsters for they are our children, and monsters are a desire we all want. Cohen describes monsters as things that we try to define but simply can not. We can understand monsters and why certain things are monsters because of Cohen and the seven theses.

Janos, Adam. “Why Did the Golden State Killer Stop Killing?” A&E, 1 May 2018, http://www.aetv.com/real-crime/golden-state-killer-suspect-joseph-deangelo-zodiac-doodler-new-bedford-highway-murders.
This article is about why the GSK mysteriously stopped killing. For 20 years, up until his arrest Joseph DeAngelo had stopped killing but had killed for 20 years before. This article also compares the GSK to other serial killers and similarities among them.
McNamara, Michelle, and Kathy Sexton. “I’ll Be Gone in the Dark : One Woman’s Obsessive Search for the Golden State Killer.” Holdings: Backlash : Mar. 2018, librarycatalog.einetwork.net/Record/.b3777430x.
This article is about Michelle McNamara who wrote the book, ”I’ll Be Gone in the Dark.” In this article Kathy Sexton describes McNamara’s obsession over the Golden State killer and her hunt to bring him to justice. Unfortunately, Michelle dies unexpectedly in 2016 before her book could be finished. Michelle became obsessed with the GSK after a women was killed a couple blocks from her house in an alley way. Her book was finished by her husband and friend, but she never got to see the justice of the GSK being arrested.

Parvini, Sarah, et al. “Golden State Killer Suspect Lived a Quiet Suburban Life, with Flashes of Rage and Anger.” Los Angeles Times, Los Angeles Times, 27 Apr. 2018, http://www.latimes.com/local/lanow/la-me-golden-state-killer-profile-20180427-story.html.
This article is about how Joseph DeAngelo was a normal guy who lived in a suburban area but had serious anger issues. His neighbors described him as someone who would yell and curse if he couldn’t find his keys. The article also says how it wasn’t until 2000 that police connected the murders and labeled him as a serial killer.
Pelisek, Christine, and Greg Hanlon. “’Golden State Killer’ Suspect Identified as 72-Year-Old Ex-Cop Who Was Fired For Allegedly Stealing.” PEOPLE.com, Time Inc, 25 Apr. 2018, people.com/crime/golden-state-killer-suspect-possible-arrest-murders-rapes-california/.
This article was written after the Golden State Killer was finally identified and arrested. His name is Joseph DeAngelo and he was a former police officer who was fired for stealing. DeAngelo was charged with the murder of four killings but police believe he committed many more. His DNA is linked to 12 murders, 45 sexual assaults, and 120 burglaries.
Westfall, Sandra Sobieraj, and Christine Pelisek. “The Hunt for a Monster.” Scribd, Scribd, 6 Nov. 2017, es.scribd.com/article/363318638/The-Hunt-For-A-Monster.
This article explains how the Golden State Killer was not always known as the “Golden State Killer.” He was also called the East Area Rapist between the years 1976 to 1986, as the numbers climbed to 45 rapes and 12 murders. One victims story was how he would tie up people in the house and put them in separate rooms, and place plate on the backs of one victim while he would rape the other. He threatened if he heard the plates move he would kill the other victims. It ended up that he did and taunted the victims he didn’t kill up to 20 years after attacking them.