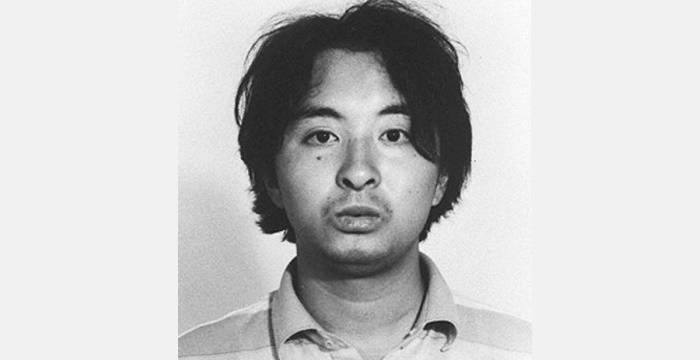 Who knew Dracula was actually in Tokyo in the late 80s, killing little girls and eating their hands? Tsutomu Miyazaki, also known as the Otaku Killer or the ‘Human Dracula,’ murdered 4 young girls in 1988, and preserved their body parts as trophies. As these acts are nothings short of horrifying it’s not the only things he did to the corpses of his victims. Tsutomu is seen as a monster for the vicious acts he committed years ago and the extent he took his killings. What made Tsutomu do these horrifying acts can be blamed on the fact that he says, “nobody would listen to me.”
Tsutomu Miyazaki was born on August 21, 1962 and as premature baby which left him with a deformity of the hands. His hands were permanently contorted and fused to the wrists, which meant that he had to move his entire forearm in order to move his hand. Due to his deformity, Tsutomu remained mostly isolated from people for most of his life. He found comfort in his family for a while which made him move back into his parent’s house in the mid-1980s. He took refuge in his grandfather but in May of 1988, his grandfather passed away and Tsutomu took the death very hard, putting him in a severe depression. He was rejected by his two younger sisters and when his older sister caught him watching her in the shower, she told him to leave and he attacked her. When his mother found out about the incident, she told him to focus more on work and he attacked her also. Tsutomu’s parents only wanted him to work at their newspaper business but he wanted to become a teacher, this conflict made him feel like they would not listen to him and all he wanted was someone to hear his problems. “I felt alone…whenever I saw a little girl playing on her own, it was almost like seeing myself (Murderpedia).” Its almost as if Miyazaki murdered the girls not only to get back at the ones who rejected him, but to get back at himself for being so lonely.

Miyazaki murdered four little girls in Tokyo, Japan, all under the age of seven and in gruesome ways. His primary method of slaying was strangulation but what he did with the bodies after was the most horrifying part. On August 22, 1988 Miyazaki took his first victim, Mari Konno who was four years old. He took her to a park, took pictures of her, strangled her and took her clothes leaving her naked body behind. He also photographed her clothing and sent the pictures to her family (Ramsland). Miyazaki got away with his first murder and then planned his next victim by October. Masami Yoshizawa was his second victim, a seven-year-old who was walking by herself. Miyazaki persuaded his victim into his car and took her to the spot where he murdered his first victim. He strangled Masami, sexually assaulted the corpse and took her clothes with him. On December 12, 1988, Miyazaki abducted another four-year-old girl named Erika Namba. who he persuaded into his car and took pictures of her like he did the other two victims. He took her clothes with him and was nearly caught. He kept a low profile for the following couple months before taking another victim. Ayako Nomoto was Miyazakis last victim, who he kidnapped on June 6, 1988. Ayako was five years old and was lured away from a park after Miyazaki had been photographing and watching her. Her body was taken back to his house where he would videotape, consume the hand of the corpse, and drink the blood of his victim. He dumped the remains in a cemetery that would later be recovered. In June of 1989, Miyazaki made a mistake that ultimately cost him the illusion of being unknown. He approached two sisters and persuaded one to come with him while the other ran home to get help. The girl’s father stopped Miyazaki in the middle of taking the young girls picture, who he hadn’t got the chance to murder yet. Miyazaki was caught by police while trying to flee to his car, only then did he confess to the murders of the four other girls. When arrested it was found that Miyazaki had 5763 videotapes, many tracing back to be movies he used as outlines for his killings. His collections included the “Guinea Pig Films” which are said to be his main focus for murder.
Miyazaki’s deformity made him isolated, but the neglect from his family sent him into an even worse depression, and his grandfather’s passing only pushed him over the edge. After being arrested and before being put to trial, Miyazaki underwent a psychiatric evaluation. This showed that he suffered from extreme Schizophrenia and had multiple personality disorder. It was proven that he was aware of the severity of his crimes and ultimately was responsible for what he had committed. After Miyazaki was convicted for the murders of the four young girls, his father said in an interview that he regretted not paying more attention to the feelings of his son. After this Miyazaki wrote a furious letter to his father ultimately blaming him for everything. His father committed suicide after the letter and his son being put in jail.
Miyazaki was a monster and was feared by many people for his horrific acts of murder, mutilation, vampirism, and preservation of body parts. As Cohen states in Thesis 4: The Monster Dwells at the Gates of Difference, “the monster is an incorporation of the Outside, the Beyond—.” What Miyazaki committed was something from the beyond, something that is so horrible, it crossed the line. Killing young girls what monstrous enough, but to drink the blood and eat the hand of his victim? And send the remains of the bodies and pictures to the families was just down right sadistic. Miyazaki was sentenced to death in 1997 and was executed by hanging on June 17, 2008(Wikipedia). Although Miyazaki got justice by being hung, the families of his victims will forever be haunted by what this monster did to their children. Sending remains and pictures of their dead daughters is something only a sick and twisted monster would do. Miyazaki crossed very many lines with the crimes he committed, and because he was rejected over and over again by the only people he had close to him, he went on a killing spree to get back at the ones who never gave him a chance. All he wanted was for someone to listen to his problems.
As there are many monsters in our society real or fake, the Human Dracula is one no longer among us, the original anyway. We have seen copycat killers of many serial killers before, who’s to say someone wont copy Miyazaki in the future? It will never be clear as to why Miyazaki drank the blood of his victim, but it’s said that he ate one victims hand out of anger for his own. Unfortunately, serial killers and serial rapists will most likely never cease to exist, the ones to come can copy what Miyazaki has done, for the monster always escapes (Cohen). 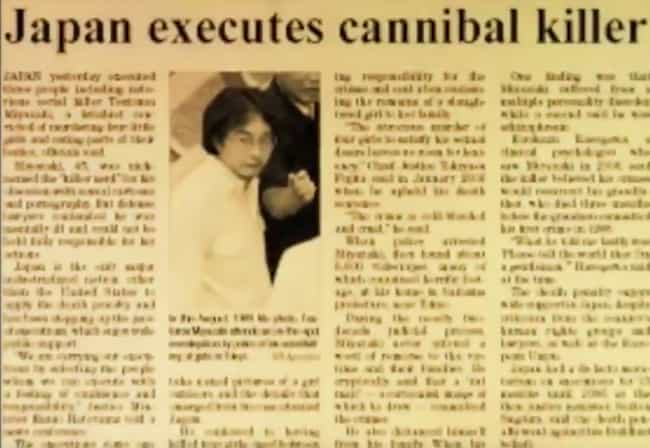 This  article is an overview of Tsutomu as a person, and also overviews his victims and what crimes he committed. He ultimately strangled his victims, but drank the blood and ate the hand of two of his four victims. He was executed by hanging on June17, 2008.

The monster theses can help us understand monsters, and why they are what they are. This can be connected to Miyazaki because he is a monster and dwells at difference. The theses cover how a monster always escapes and we can see that in copycat killers.

Mehrotra, Akarsh. “20 Of The Most Notorious Serial Killers The World Has Ever Seen.” ScoopWhoop, ScoopWhoop, 12 June 2015, www.scoopwhoop.com/world/most-evil-serial-killers/.

This article covers the 20 most notorious serial killers the world has ever seen. Tsutomu Miyazaki is the third on this list and explains the crimes he committed and how he was named the human Dracula and the little girl murderer. Tsutomu also preserved the body parts of his victims as trophies.

This article describes the life of Tsutomu Miyazaki’s life and the acts he committed. He killed four young girls and drank the blood of one victim and ate the hand of another. This was all going on in 1988 in Tokyo after the death of his grandfather in May of 1988.

This was just an overview of Miyazaki’s life and his killings. It covered how he drank the blood of his victims and ate their hands. He also preserved the body parts, and sent the remains of his victims to the families of the deceased.