The train comes to screeching halt. The screaming of steel is soon replaced by the wail of human voices. The train doors are ripped open and the human cattle within stumble out under the threat of death by soldiers screaming orders and waiving guns. “Schnell! Raus!” The soldier’s orders are brutally enforced with buttstock and bullet alike. Those who died in transit are unceremoniously kicked aside and trampled as frightened passengers struggle to follow orders. As you quickly shuffle outside, an assault of chaos batters your senses. Dogs are barking, soldiers yelling, passengers screaming, sporadic gunshots, and the blinding light as your eyes adjust from total darkness. Worse yet is the smell. Not the feces and urine from the train cars, but something worse, a sickly-sweet smoke that clings to your mouth and your nose. You don’t know where it comes from, and you’d rather not find out. It is then that you see him, a sharply dressed man walking briskly through the masses as if he is looking for something. He is of average height with dark hair and a fair complexion, in a different setting he might even be considered a handsome fellow, but here he stands in disturbing contrast to what surrounds him. In his hand he holds a riding crop. He doesn’t strike anyone, he simply uses it to gesture left or right as if directing traffic in an intersection. As you get closer you hear a familiar sound, he’s whistling a song your grandmother used to play when you were a child, you can’t remember the name. As you approach, he gives you a kind smile and gestures you to the right, and your parents to the left, despite your parents best efforts to resist the soldiers enforce his command and you are ushered away to an unknown future. That is the last time you see your parents. This is the first, and most pleasant, time you will see the “Angel of Death”.

Josef Mengele was a German born SS physician who would become one of the most infamous members of the German war effort and a symbol of the evils of the Nazi party. Throughout his time at Auschwitz he gained an unparalleled reputation of cruelty and sadistic tendencies towards the inmates. Surgeries without anesthesia, the purposeful infection of inmates with diseases, and the drowning of inmates in freezing water. Perhaps his favorite pastime, however, was the sorting of new inmates as they arrived aboard trains from across Europe. A survivor of Auschwitz recounts that of the twenty or so physicians at the camp, only Mengele and one other officer could stand to sort prisoners without being inebriated to some extent. Not only could he stand it, he seemed to relish in it. Deciding who would live and who would die soon became a favorite pastime for him. This “sorting” also afforded him the opportunity to search for exceptional “specimens”. Before the war, much of Mengele’s research was based on the study of genetics, twins, and multiple births. His position at Auschwitz afforded him the opportunity to find unique individuals from across Europe and experiment on them as he pleased. So where does a man like this come from? What circumstances convince a man to treat others like this?

The story of Josef Mengele has a surprisingly tame and uneventful beginning. He was born in Germany in 1911 to Karl and Walberga Mengele who raised their son with devout Catholic values. In his memoirs he reports the absentness of his father who was a successful producer of farm implements and the overbearing nature of his mother who enforced her Catholic views upon him. Aside from this he seems to have had, by all accounts, a relatively normal childhood. His father had done very well for himself in his business which afforded their family a relatively high standard of living for the time. He did very well in school and went on to study philosophy in Munich and eventually gain a medical degree from Frankfurt am Main. In many serial killers and school shooters we often see a troubled childhood or circumstances in their youth that cause them to begin down a certain path. In Mengele, however, it seems that this was not the case. Some sources claim that his overbearing mother was an indirect influence on him as he started down this path, but it is unclear to what degree, that this was the case, if at all. Regardless of his mother’s influence, it was at his time at university that I believe began him down the path of a monster.

At this time in Germanies history their was a dangerous duo in place. An enormous sense of national pride and a widely spread and accepted view of German and Aryan superiority. These views were proudly displayed throughout the country and there were even divisions of Universities that were dedicated to “racial hygiene” such as the one at Frankfurt that Mengele attended. It was here that Mengele would come into contact with his future mentor. The infamous Dr. Otmar von Verschuer. Verschuer was a human biologist and geneticist who was doing much research into twins, hereditary biology, and “racial hygiene”. He studied hundreds of pairs of twins to discover whether criminality, feeblemindedness, and cancer were inheritable. He even recommended the forced sterilization of those people who were seen as mentally or morally subpar as he believed that they were a waste of resources and they would pass on these inferior traits to others throughout the Third Reich. I believe that this was very much an sufficient cause for Mengele’s actions. Despite Dr. Otmar never being tried or punished after the war, there is credible evidence that he kept in contact with Mengele throughout his time at Auschwitz and even had specimens sent back to his labs in Frankfurt from the camps. Some historians believe that Mengele’s dedication and devotion to Verschuer is related to the lack of love he felt at home during his youth, leading him to try and please his mentor like a child would a parent. It is unclear if this was actually the case or not, but it is a definite possibility.

What is clear is that Nazi propaganda and ideals had a tremendous effect on his way of thinking. We see the transition from a carefree happy youth to one of the worst war criminals in history. I believe that the immense Nazi propaganda machine and the “Aryan supremacy” theories that pervaded German society had a lasting and irreversible effect on young Mengele. Although I have no scientific evidence to back this up, I am a firm believer that racism is learned. Have you ever watched little kids at a park? they’ll play with anybody that’s the same height as they are, regardless of race or color. I believe that this may be what happened to Mengele. A survivor of Mengele’s exploits, Alex Dekel recounts the attitude with which Mengele performed his experiments in an interview. “I have never accepted the fact that Mengele himself believed he was doing serious work — not from the slipshod way he went about it. He was only exercising his power.” (Douglas B. Lynott, Alex Dekel, pg. 13) This “slipshod” method and the odd experiments he conducted lead me to believe he wasn’t concerned as much with research as he was with extermination and power over the “undesirable”. While it is true that he was doing research on twins to help propagate more Aryan births and other experiments that had valid uses for the Nazis, I believe it was a sadistic sense of power and the belief in Aryan supremacy that fueled his “research”, not scientific discovery. 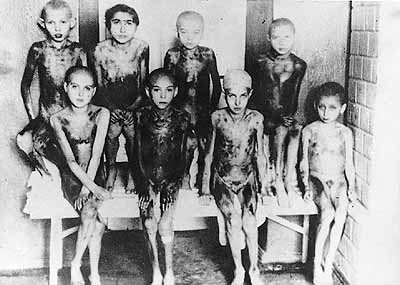 I also have a personal theory that may or may not be valid. I believe that when Mengele looked at, and learned to hate the Jew, he may have hated a part of himself as well. His features are far from the typical “Aryan” and he, ironically enough, resembles a Jew. He was of average stature with a prominent brow and dark hair. This cognitive dissonance may have lead him to despise the Jews and Gypsies all the more as he realized that he could never fully become the very thing that he was trying to propagate. There is also evidence that his sexual attraction towards the female inmates may have something to do with his behavior. Douglas B. Lynott describes in his paper how he would often ask the female inmates about there sex lives, and have them paraded nude before him on multiple occasions (Douglas Lynott. pg.10). I believe the fact that these women were dubbed “verboten” or forbidden gave them a certain appeal to Mengele. Just as in the monster theory number six we learned that the monster is a type of desire, I believe that so to did Mengele see these “monsters” as attractive. I believe that the combination of both these aspects may have led him to experience a sense of self loathing that manifested as an increased urge to rid the world of the thing he most hated , yet was and wanted. Whatever his reasons, it is clear that when men are given power with no accountability, evil can abound. We must be careful to keep those in in power accountable to a higher standard lest we repeat the horrific effects of the Holocaust and men like Josef Mengele.

Annotated Bibliography.
1.“When Medicine Went Mad: Bioethics and the Holocaust”; Arthur Caplan; July 17, 1992; The Humana Press Inc.
This book is a compilation of expert opinions and survivor accounts of the Holocaust, its causes and effects. The author has a PhD in bioethics and the book itself is a compilation of survivor accounts and expert opinions on the subject of the holocaust and medical ethics. I plan on using this mainly for the firsthand accounts of Auschwitz and Mengele himself.
2.Bachrach, Susan. “In the name of public health-Nazi racial hygiene.” New England Journal of Medicine 351 (2004): 417-419.
This a journal article on the policies and effects of eugenics and how the Nazis implemented them. The author is Dr. Susan Bachrach who happens to be a curator at the U.S. Holocaust Museum in Washington D.C. I plan on using this piece to further demonstrate the evils of the Nazi’s eugenics policy as well as offer specific examples of its use. It also offers information about Josef Mengele’s mentor, Otmar von Verschuer.
3.Lynott, Douglas B. “Josef Mengele.” TruTV. com Online Magazine (2007).
This is an article about the life of Josef Mengele and his slow descent into the monster of Auschwitz. Even though it is an article published on a rather “entertainment” based website, the sources for the article are from well known and researched books that look into Mengele’s life. I plan on using this article to describe Mengele’s upbringing and how it lead to the terrible acts he did in Auschwitz.
4. “Deadly Medicine-Creating the Master Race-physician and scientist profiles”; United States Holocaust Memorial Museum; http://www.ushmm.com; https://www.ushmm.org/exhibition/deadly-medicine/profiles/
This is an article that describes the various Nazi scientists during and before the war that assisted in furthering Aryan supremacy and performing terrible experiments. The website is the official one for the United States Holocaust Memorial Museum which I believe is a very credible resource. I will use this to explain Dr. Otmar von Verschuer’s role in the Nazi empire and Mengele’s life.
5. 5. Cohen, Jeffrey Jerome. “Monster Culture: Seven Theses.” From Monster Theory: Reading Culture. Minneapolis: University of Minnesota Press, 1996. 3-25.
This is a series of seven these that describe monsters, how their made and how they describe the culture they come from. It was written by the guy that literally wrote the book on monsters; he has studied them for many years and these theses are part of an original book further discussing monsters. I will use this to describe the monstrous nature of Nazis.