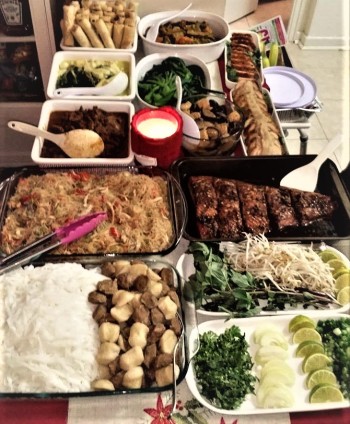 Growing up in the Philippines, I would say that we were fortunate to have an all-around helper who cleaned the house; washed and ironed our clothes; did the grocery shopping and prepared our meal; and took care of us. Though tita Mercy was our helper, we always treated her like a family. (By the way, “tita” is aunt in English; we do not only use tita to address our relatives but to refer to older women who are not related to us and old enough to be our aunts to show our respect). When both of our parents went to work abroad or overseas, my siblings and I were left under tita Mercy’s care and guidance. Our father has his renovating business in Canada, while our mother worked as a registered nurse in one of the hospitals in Saudi Arabia. I was only six years old, our older brother was seven and the twins, a boy and a girl, were only four years old at that time. Tita Mercy was a strict disciplinarian but she had a heart of gold. She reared us like her own children and taught us basic household chores such as how to mop the floor and wash the dishes.

Tita Mercy called me one day and told me that she was going to teach me how to cook. I was twelve years old then. I remembered protesting and asking her with a long face, “Do I really have to?” And she replied sternly, “Yes, because you are a GIRL (Oh, how I hate that word!) and it is important that you learn how to cook especially when you have a family of your own. Besides, if you do not know how to cook, you will starve to death.” “Starve to death? Isn’t that a bit exaggerated?” I thought sarcastically with a raised eyebrow. I did not even dare to say that aloud for fear that I would be castigated for answering back. My family and I love to eat and we drool over good food. However, I detested preparing and cooking a dish like how I despised and dreaded English when I was in grade school and high school because it seemed so laborious and as complicated as learning the grammar and sentence structures. I would rather be outside playing Chinese garter (two individuals will hold the garter on both ends while the other players will try to across over it without being tripped. It will start at ankle level and goes up until over the head), hopscotch or hide-and-seek with my friends than to understand the art of cooking. Anyhow, I had no choice but to stand there with a heavy heart and watch without enthusiasm as tita Mercy demonstrated how to cook chicken adobo (the chicken is marinated in vinegar, soy sauce, garlic and peppercorns, which is sautéed in garlic and onions afterwards and simmered in the marinade); beef caldereta (chunks of beef short ribs are browned and sautéed in olive oil with plenty of garlic, onions, and tomatoes; and slowly cooked until tender. Fried potato wedges, flower-shaped carrots, green peas, red bell pepper strips, and finely sliced bird’s eye chillis are added, and it is served with grated cheese on top); and other dishes whenever I did not have school. So every weekend I would have a cooking session with her, nonetheless, I never took it by heart.

I was a teenager when my mother, siblings and I migrated to Canada to join our father. Life was tough because we had to do everything since we did not have a helper and plus the fact that it was costly or expensive to employ one. One day, our father came home from work, exhausted and hungry, only to discover that there was nothing to eat. My younger siblings and I only knew how to boil or fry an egg. Our father or older brother were the ones who would usually do the cooking because our mother is not really a good cook (shhh… my mom knows how to cook but not as appetizing as our dad’s cooking). I would never forget how my father was boiling mad that day. He looked like a red Incredible Hulk! I was really scared and how I wished that I had paid attention to tita Mercy when she was showing me the basics of cooking and never took it for granted. The incident with my father played a major part for my eagerness to learn how to cook. My older brother, kuya Neil (kuya means older brother and a sign of respect as well), is a genius when it comes to cooking. He loves to experiment different menus and it always turns out delish. He will taste a certain dish and he will know exactly how to prepare and cook it. He really works fast in the kitchen and can cook three to four dishes at the same time. Oh how I admire that special talent of his and wish that I was gifted too. Anyway, Kuya Neil had patiently taught me everything I need to learn and this time I listened intently until I was confident enough to cook without his supervision.

One evening, we invited our church pastor and his wife, who are our family friends since we were still in the Philippines, for dinner. My kuya Neil and I prepared the meal that night and I recalled vividly that I cooked spaghetti for the first time. I had watched kuya Neil numerous times how he cooked his signature sauce but I decided to do it my way. Besides, I was full of confidence and thought conceitedly, “This is just a piece of cake.” At dinner time, as we were eating, I noticed that it was only tito Neo (tito, which is uncle when translated in English) who was enjoying the spaghetti while the rest had this funny look on their faces. Kuya Sherwin, a good friend of ours and our tenant during that time, could not contain himself and blurted out jokingly, “Beks (my nickname), next time just leave the spaghetti to Neil and just stick with your pancit (made of sautéed rice noodles with chicken and assortment of vegetables), which is your expertise.” Everybody at the table burst into laughter except for tito Neo who sincerely proclaimed, “It is delicious!” I was confused. Kuya Sherwin asked tito Neo humorously, “Tito, what do you mean it is delicious. Have you eaten spaghetti before? Do you know how it should taste like?” Tito Neo replied honestly, “No, this is the first time I have it.” Kuya Sherwin commented amusingly, “No wonder you said it was delicious,” and everybody was still laughing like a hyena. I got curious so I decided to try my spaghetti. Oh boy! It tasted horrible! It was not even close to kuya Neil’s spaghetti, which is a little bit sweet and cheesy- the Filipino style. I was really embarrassed and felt like yelling, “Please, earth open up and swallow me alive now!” Nevertheless, I took that experience as a challenge to motivate me to do better instead of being discouraged. At least, as a consolation, there was one person who appreciated my spaghetti- tito NEO!

When I got married and had my own family, my passion for cooking has intensified. I would find myself checking cookbooks or browsing the internet for recipes. Sometimes I would follow the exact measurement of the ingredients and the step-by-step instructions. When it did not come to my expectation, I would modify the ingredients until it was savory and suited my family’s taste buds. My family is the light of my life, and serving them gives me simple pleasure and joy. They are my number one critics and supporters. Occasionally, I would hear my son’s genuine opinion like, “Mom, don’t think that I am being mean or rude… your soup tastes bland, but it is still good though.” Or he would always say lovingly while hugging me tightly, “Thank you so much, mom, for cooking.” In addition, hearing them complimenting me how delicious their “favorite spaghetti” is (Yes! You read it correctly, both my son and his father LOVE my spaghetti), and my son’s cheerful remark, “Mom, your spaghetti is the BEST,” is such a rewarding and it brings happiness to my soul. This is also one of the reasons why I take pleasure in cooking because of the affection and appreciation I get from them. At the same time, I am glad knowing that my family will not “STARVE TO DEATH” (*wink).

I have learned that the key ingredient for cooking is LOVE, to make every dish a delight and heavenly. You need to have a joyful heart and cheerful spirit in order to produce a succulent meal. Do not cook just for the sake of cooking instead do it wholeheartedly because you love and enjoy what you are doing. My father used to say when we were young, “When you are given a certain task or duty, make sure to give your best and do it flawlessly.” I also apply that every time I prepare the food. I make sure that it does not only look appealing but it tastes yummy too. I may not be a world class chef or the master chef, Gordon Ramsay, yet, looking at how my son’s eyes lit with the sweetest smile on his face whenever I cook his favorite food is already enough to make me feel that I am the GREATEST cook!