Medical marijuana has helped people already in 29 states and the district of Columbia giving them positive health benefits. For example, Mykalaya has a mass in her chest. She was currently going to chemotherapy, but it was not doing what it was supposed to. Doctors recommended a full body radiation and bone marrow transplant. Mykalaya started her treatment but her parents noticed that she was not acting like herself she wasn’t happy. She didn’t want to eat, so her parent decided to try something different and started to treat her with cannabis. She takes two pills of cannabis oil twice a day which is equivalent to ten bong hits. She also eats it, in a brownie or lollipop, her parents also apply it to her skin in a lotion. Her parents say since she has started using medical marijuana she been more energized, a lot happier, and she has started gaining weight. Her parents claim that the active chemicals in medical marijuana that are like the chemical in are body that are involved in appetite, memory, and pain, help reduce her anxiety and help with inflammation and relieve her pain. They also say it has helped control her nausea and vomiting caused by chemotherapy. It has also stimulated her appetite. 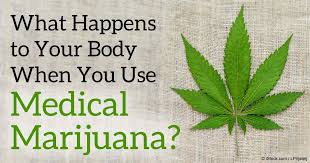 More than half of the United States and the district of Columbia have legalized medical marijuana in some form, and more are considering bills to do the same. Yet while many People are using marijuana, the FDA still hasn’t approved its treatment because there haven’t been enough studies to prove that its safe and effective. Medical marijuana uses the marijuana plant or chemicals in it to treat diseases or conditions. It’s basically the same product as recreational marijuana, but it is taken for medical purposes. The marijuana plant contains more then 100 different chemicals called cannabinoids. Each one has a different effect on the body. Delta-9-tetrahydrocannabinol (thc) and cannabidiol (cbd) are the main chemical used in medicine. The THC also produces the “high” people feel when they smoke marijuana. Depending on the strain you can either receive a creative energizing uplifting head high. There are other strains that give you a relaxing body high. The initial effects when smoked takes a few minutes to feel that could last a few hours. When you eat medical marijuana, the initial effects kick in an hour after, but the effects last several hours. Although you can never overdose on medical marijuana some side effects are dry mouth, impaired mental function, dizziness, and heart and blood pressure problems. Also, when smoking it has a negative effect on the heart and lungs. Long term effects of cannabis are not clear, but some concerns include memory and cognition problems.

One of the most common use for medical marijuana in the United States is for pain control. “When ingested or inhaled, the compounds bind to specific receptors in the brain and nerve cells, which slows pain impulses and eases the discomfort.” But medical marijuana is used to treat several different conditions like cancer, multiple sclerosis, crohn’s disease, and nausea but it has also shown promising research of PTSD in veterans who are returning from combat zone. Many veterans and their therapists report drastic improvement and clamor for loosening of governmental restrictions on its study. “Research suggests that those with mental illness might be self-medicating with marijuana – turning to the plant to help manage their symptoms, rather than becoming ill after use. Emerging evidence indicates that psychiatric patients who try marijuana show significant improvements in symptoms and clinical outcomes (such as lower mortality rates and better cognitive functioning) compared with those who have not. Some of the unique chemicals in marijuana, such as cannabidiol (CBD), seem to have anti psychotic properties. Now, researchers are investigating it as a possible treatment for schizophrenia and depression” (Maurizio). There has been a major controversy with the use of medical marijuana when it comes down to children.

Medical marijuana received a lot of attention a few years ago when parents said that a special form of the drug helped control seizures in their children, so far research hasn’t proved it works. But some epilepsy centers are testing a drug called Epidiolex. The research that was done and with 272 patients’ 86 percent of cases had a seizure reduction and ten percent experienced complete seizure remission. For example, Allison Hendershot relocated her family to Colorado to help her daughter who had been having seizures since she was 4 months old. Since she has been receiving Epidiolex her daughter has been able to concentrate more, and her seizures have dropped so she doesn’t have as many.

Being a single mom to a 4-year-old and doing my research I would give my child medical marijuana if needed for seizures or cancer. I agree with the parent’s decision to use medical marijuana on their child. I couldn’t imagine my child going threw such hard medication with awful side effects. If a plant can help ease the pain and bring my child some comfort I will do whatever it takes.