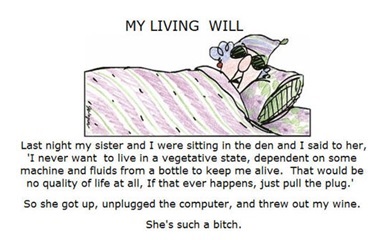 Death is inevitable. It is topic not many people would like to think about much less be comfortable to talk about.However, it is a very sensitive issue that should be discussed between family members. Many of these patients have no written legal documents that state their end-of-life wishes. If a brain dead patient is placed on a breathing machine and other forms of life support, who would be the one in charge of making life-and-death decisions such as when to pull the plug? When the choice to take a loved one off of life support after brain death is declared to families, the choice is not always easy. Today, doctors and family members face challenging ethical questions concerning when and if they should pull the plug. Therefore, to relieve both sides from making such a difficult decision, a brain dead patient should be pulled out from any means of life support per patient’s wish as indicated: in his/her living will, per doctor’s pronouncement based on neurological criteria of brain death, per hospital’s concern as to minimize financial burden, and unnecessary suffering of both the patient and their family.

Fig. 2.Who do you wish to make health care decisions for you when you can’t make them for yourself any longer? https://www.winstonmedical.org/visitors-patients/advanced-directive/

Brain Death Scenario:
There are many cases of brain dead patients who are placed on life support machines. The most recent case is JahiMcMath, a 13-year-old African American girl from Oakland, California, who got admitted in the hospital for sleep apnea (breathing repeatedly stops and starts when asleep) and had her tonsils removed, was pronounced brain dead on December 12, 2013 after she suffered massive blood loss from surgery (Schmidt 1). She had no living will before the surgery, which directly made her parents as surrogates to make decisions for her. She was placed on life support for four years. When her parents decided to pull the plug, Jahi stopped breathing and her heart stopped beating. She was pronounced dead the second time on June 22, 2018 (2).

Brain Function:
What is the function of the brain? Kasule states the brain is the command, coordination, and communication center for the body to work (2). He continues, when an injury to the brain happens due to lack of oxygen, the brain is very sensitive to such abuse, that it dies irreversibly first before other major organs like the lungs and the heart. The injured brain cannot recover or be replaced. Therefore, the brain controls all the other organs, and when it dies, the other organs imminently follow. 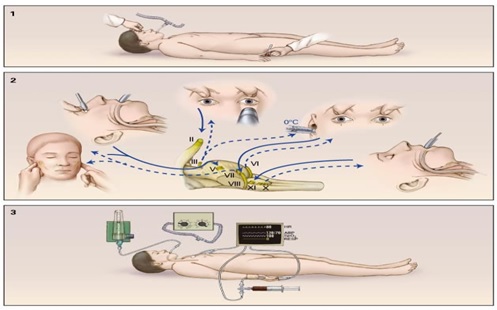 Reason #1: Why Unplug – Patient is Brain Dead Based on Neurological Assessment
Criteria

The neurological assessment for brain death is a universal law or criteria followed by doctors when examining and confirming if a patient is dead or alive, based on neurological criteria as lack of responsiveness (coma), absence of brainstem reflexes (i.e. pupils do not react to light, no facial muscle movement, no gag reflexes), absence of breathing drive, and no brain waves activity as shown in figure 4. If there is no change, the test is repeated after 24 hours to confirm death (Jakusovaite et al 206). This has become the criteria for brain death confirmation that doctors follow. As opposed to comas, when patients are in comas whether medically induced or through the patient’s health process, tests are done such as those indicated above that show that the body is still responsive and the brain is not dead. There is also a test to check for brain waves and in coma patients, brain waves are still present. However, in the brain dead patient, waves are no longer present or active. In 1973, brainstem death was identified as the point of no return and the United States Uniform Determination of Death Act was enacted (Kasule 2). The brain dead patient is not able to cough or swallow, breathe on their own, do not display brain waves, and have no hope in quality of life. Thus, by pulling the plug, it will cause the patient’s breathing to cease and thereby causing the heart to stop.

Reason #2: Why Unplug – It Drains Family Resources When Patient Has No Point of Return (Dead)

The purpose of protecting resources is attained by earlier confirmation of death using brain death criteria to stop expensive life support in the Intensive Care Unit (ICU). The daily costs in the ICU are higher during the first 2 days where the cost of mechanical ventilation is $10,794 on day 1 and $4,796 on day 2 (Dasta 1266) in addition to ICU equipment supplies. As of January 1, 2018, the cost of room and board in critical care or trauma pediatric intensive care unit in University Hospitals in Cleveland Medical Center is $10, 140 per day (Patient Pricing Information 1). The indirect costs are expenses when family leave their work and travel to the hospital daily. However, once death is confirmed any further ICU care is a waste of resources (Kasule 5). In fact one of the reasons a patient is taken out of life support is when the family can no longer afford the financial cost of the treatments. The cost is so high that it takes toll on the family’s finances. It is a lose-lose situation if a patient will never recover and the family will end up in debt.Due to this financial burden, it is important that staff have a realistic conversation with the family to discuss the patient’s quality of life and the need to pull the plug.

Reason #3: Why Unplug – Respect One’s Wishes Not to Be on Life Support if No Quality of Life

Many critically ill patients opt out of life support and state their wishes in an advanced directive or living will in the event there is no chance of recovery or quality of life. Tejwani defines advance directives as a set of instructions recognized under state law in reference to the provision of health care when the individual is incapacitated (772). It communicates one’s wishes to family, friends, and health care professionals in the event of becoming unable to voice one’s own wishes. It may also include durable power of attorney (POA), a document designating a surrogate decision-maker if the individual is incapacitated and can include orders for withdrawal of life support. Patients with advance directive are much more likely to receive end-of-life care consistent with their preferences. A majority of the population in United States do not have advance directives as shown in figure 6. A surrogate or proxy speaks for the patient and is to follow the patient’s specific views on end-of-life values and preferences. If the patient’s preferences are unknown, the surrogate should make decisions in the best interest of the patient (772). It can be difficult to begin the conversation on end-of-life preferences, however, a simple and/or quick discussion can make a huge difference. In the instance of Jahi, had her parents and medical staff asked her what her preferences were prior to her surgery, it may have made a difference for her and her family’s suffering afterward. Thus, the growing consensus is that every adult, regardless of age, should consider preparing an advance directive because unforeseeable accidents can and do occur.

Family members often believe that a patient on a breathing machineor ventilatoris still alive because the patient is breathing and the heart is beating even when the brain is dead. The use of life support is that it sustains life for a longer period of time to allow for the processing a traumatic event, acceptance of the situation, more time to grieve, and possible solutions. However, it is wrong to keep someone alive without their consent, possibly prolonging their suffering. The downside to this situation is difficult to determine when is the right time to pull the plug? In the case of JahiMcMath, who was on life support, her parents believe that it is morally wrong according to their religious belief to let someone die (Schmidt 1). Emotionally, it is difficult for Jahi’s family when confronting the issue of her brain dead status and it would be difficult for them if they are asked to pull the plug. Her parents were hoping she would recover, that is why they opted for life support (Schmidt 2). However, after 4 years of being on life support, Jahi’s organs started to fail. Her parents decided to pull the plug because that is the only realistic option for them and for their daughter. Had the parents understood the meaning of brain death and what it means in terms of her quality of life, it is possible that they would have pulled the plug sooner. Because after they turned off the ventilator, Jahi stopped breathing and her heart stopped beating. The only support to keep her alive was the breathing machine.

Fig. 8.Brain-dead patients deserve to be laid to rest. https://sundial.csun.edu/2014/01/brain-dead-patients-deserve-to-be-laid-to-rest/

Addressing Opposite Side #2 – Family Belief of Miracle

Religious family members of a dying patient believe that miracles can happen. Tejwani states the patient’s family rejected the recommendation of considering comfort care of terminally ill patient and expressed strong feeling that a miracle would occur and the patient would regain consciousness and recover (773). Based on this hope, they requested continuation of unlimited life-sustaining measures. Despite being repeatedly informed that these measures would not alter the patient’s outcome, the family persisted on their requests. The care team felt the family’s expectations to be unrealistic and their demands unreasonable. Providing invasive care to a brain death patient with no hope of recovery creates emotional and moral distress on care providers, and providers may consider themselves agents of harm. Blindly following the surrogate’s wishes is not always in the patient’s best interest and most surrogates tend to request to “do everything possible.” Although in some circumstances this achieves nothing more than inflicting bodily injury on the patient (774). The appropriate time to pull the plug is after the confirmation of brain death using the brain death criteria and only after a very thorough discussion with the patient’s family. Jahi’s mother was not able to move on with her life thinking that her daughter was still alive and was stuck in the stage of denial (first stage of the grieving process) for 4 years. Magic miracle cures do not happen for a brain dead patient.

True, death is inevitable and talking about it should not be avoided among family members because unforeseeable accidents can happen anytime. The important message for patients and their families is, before a family member ends up in ICU or undergoes a surgery no matter how minor, they need to talk about what one would want in advance. End-of-life decision-making is extremely challenging for patient’s family to make without an advanced directive or living will. With an advance directive, the surrogate, family, and care providers have proof as to what the brain-dead patient’s values and preferences are. Nobody wants to be kept alive when such life would be a meaningless existence. Everyone wants a sentient existence in which one has the ability to think, read, speak, write, and communicate. Anything that could not restore a person to this is a purposeless and meaningless life. Moreover, state laws meeting should revise the Universal Declaration of Death Act (UDDA) to ethically make the doctors pull the plug the moment a patient has been pronounced brain dead. Brain stem death should remain the mainstay of defining death so as to give families closure and prevent the patient’s suffering.