You come home from a long day at work and the only thing that you look forward to is seeing that big smile and little arms thrown around you. However when you get home they seem reserved as if something is on there mind that may be bothering them. Yet you brush it aside thinking that maybe it’s just a “Phase” or just a kid being a kid but that’s where we go wrong we assume everything is ok and never take action. What you may be experiencing are the early signs of your child dealing with mental illness. In this we are going to explain what mental illness is in children , symptoms, treatment and what parents can do in the case of their child being diagnosed with it.

Now the talk of mental illnesses is very new in which some people still believe that it made up and all in there head . Therefore they yet to fully grasp the understanding of  mental health is not only in adults but in children as well. The full definition of mental health coming from Mental Health . gov says “Mental health includes our emotional, psychological, and social well-being. ”(Mental Health.gov ).  Just as we take care of our bodies physically by going to the doctors, dentist and optometrist we often overlook the most important one and that’s your mental health. As in adults they are able to communicate what they are feeling and have self realization that something may not be all right. Furthermore, that’s not the case with children they don’t fully understand what is going on and may have a difficult time trying to explain how they may feel. You can’t blame the parents or the children 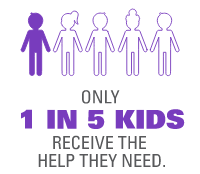 because we simply don’t have a better understanding of mental health, especially in our youth. So how do we go about figuring out how to better help our children and even ourselves in identifying common traits and symptoms that could lead to catching it early on?

Well not all mental illnesses are the same and range in a variety of different forms from ADHD, depression, Bipolar disorder and so on. However detecting the common symptoms early we can help to raise any red flags in which can take your child to a specialist. Coming from Mayo clinic it states “Mood changes, intense feelings,behavior changes, difficulty concentrating and physical symptoms”(mayo clinic). These are the most common symptoms found and should be taken seriously rather than brush it away since most of these don’t have any

physical symptoms. Besides pointing out what has been already stated another way to point out anyareas of concern is to talk to them although they may not be able to fully put together what they are feeling it helps to create an open environment in the case your child did come to you with any concerns they won’t feel embarrassed to express what they feel. This is typically in boys since the big stigma is, is that they are not supposed to share their feelings and this could lead to them having repressing feelings and will be harder for them to open up or understand that this is a serious issue. Do not lose hope because now in modern medicine we are able to
start to put together treatments in order to help treat those who are diagnosed with mental illnesses.

Depending on how severe the issue is different forms of treatment include prescription medication, therapy, and even support groups. One of the most common would be the medication the doctor gives once they have diagnosed your child with the specified conditions. Unfortunately there is no one pill that can help to fix all problems but the medication is broken into groups of stimulants and depressants. For example, in one article it says “ Prozac and sertraline are classified as depressants and Ritalin,adderall are classified as stimulants”(mednet). The anti-

depressants help children with depression and various forms of anxiety by helping to balance out there serotonin levels in the brain. As for the stimulants they typically help with children who have ADHD by treating it with ritalin you would assume that it would make it worse but it has the opposite effect on people with ADHD. Another form of treatment would be to take your child to therapy and also a psychologist to help them understand whats going on. A specialized personnel like this can offer different ways of going about having a condition and offers the child a confidential person to talk to. Although medication and therapy are great forms of treatment they are pretty pricey for those that are low on income. So an alternative form of therapy is the practice of meditation lindsay cates article getting kids help in time says “Mindfulness-based cognitive therapy is a proven way to curb sad thoughts. Apps like Headspace and Happify walk teens through relaxation exercises and breathing techniques, or can target specific things like reducing worry and building relationships.” (getting kids help in time). Not only will this cut costs on expensive treatments but as a parent you and your child can both benefit from it and also offers a great opportunity to bond. As a recurring statement that shows thought this is the involvement of the parents and what you could do to help at least improve the situation for your child and yourself.

Your involvement in your child’s life whether it is at school or in the household has a very important role in your child’s mental state. An example of this comes from a study that was in rhode island and the result showed “Among Rhode Island children, nearly 1 (19.0%) in 5 had mental health problems, 1 (15.6%) in 6 lived with a highly stressed parent, and one third (32.7%) had parents with low involvement”.(Children’s Mental Health and Family Functioning in Rhode Island.) Just by implementing a more positive environment in the household paired along with the involvement in the child’s life can truly impact them in a positive way. The second form of parental involvement would be

to get involved in your child’s schooling. They spend a majority of the time in school with their teacher and fellow peers that  can also affect their mental health as well. Neil humphery says in his article “School is a primary developmental context after the family (Bronfenbrenner, 2005), in which socialisation of emotions, behaviour and relationships occurs; thus, they are clearly more than, ‘merely convenient sites for prevention and intervention’ (O’Toole, 2017, p.455)”(Are the Kids Alright?). This is where your child will learn and a place to develop who they are simply by building relationships with their teachers can help give you an insight of how they are behaving at school.

In conclusion we looked at the common red flags symptoms to look out for , treatment and the steps you can take as a parent to help aid in your child’s mental health. Just because they may appear to be okay at face surface we all face internal struggles and the way we take action as parents can help in the process for your child.

“Worried about Changes in Your Child’s Mood or Behavior?” Mayo Clinic, Mayo Foundation for Medical Education and Research, 1 Mar. 2018, http://www.mayoclinic.org/healthy-lifestyle/childrens-health/in-depth/mental-illness-in-children/art-20046577.