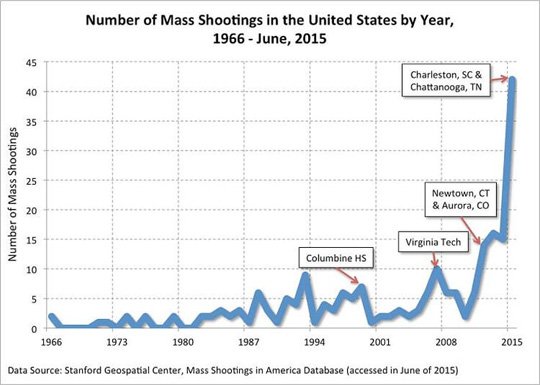 The killer is America’s oldest and most popular monster, and he grows more powerful every day. In the last month, there have been six mass shootings in the United States, five of them in the last week alone. There is no shortage of events to study, yet, as the frequency of shootings and body count in the U.S. continue to rise, there are few studies available which analyze the uniquely American phenomenon. That is not to say that mass shootings and killings do not occur worldwide. In 2015, one hundred and thirty people were killed in France as a result of an attack perpetrated by terrorist organization ISIL. In 2011, 67 Norwegians were victim to a mass shooter, an incident which still today marks the most devastating mass shooting worldwide. Still, while many countries around the world have experienced their own unique versions of this tragic phenomenon, the United States remains the only country where this continues recur on a regular basis. But why?

In the event of a mass shooting, one of the most popular courses of action to take is to begin to tie the event to one of the many radical political or religious ideologies present in our world. In the shooting which occurred only yesterday (at the time of writing this), the shooter claimed to have executed his attack as a result of the “Hispanic invasion of Texas” (Politi). In the 2016 shooting at an Orlando Nightclub, the shooter claimed to be acting in retaliation over a recent U.S. airstrike which killed ISIL leader Abu Waheeb (Doornbos). The perpetrators of the 2015 San Bernardino shooting were found to have committed themselves to jihadism (Baker). These allegedly idealogical attacks are comparable to many worldwide events in which mass violence is perpetrated in the name of political or religious extremism. But, in my opinion, this does not speak to the violence in America.

Political, idealogical, and religious extremism is nothing new in the world, nor is it uniquely American, yet only in the United States does this supposedly lead to frequent acts of mass violence. This fixation on a shooter’s motive is of little importance to solving the problem of violence in America, and, in fact, is useless when analyzing many of the most violent incidences to occur in the United States. The 2017 Las Vegas, which left 58 dead and is still by and far the worst shooting to occur in the United States, left little to no information as to a motive for the shooting. There was no extreme political or religious affiliation, nor a clear motive for the violence; the shooter had seemingly done it for no other reason than he could. The personal beliefs of the shooters are only contributing factors to the violence, up until the moment that they aren’t. Instead, there is a far more important factor to the violence which occurs in the United States, and that is the media glorification of its many killers.

The killers of these United States have long been glorified by our media and our people, and, according to at least one study, is the major contributor to the continuing violence. Speaking only to news coverage, a study by doctor Jennifer B. Johnston and her coauthor found that the most common thread in the mass violence is the shooters own narcissism and a desire for fame; this, along with an increase in news coverage, twenty four hour news coverage, and the rise of social media have only served to contribute to this fever. In what other situation can a person go from total social isolation to media deity in less than 24 hours?

Attempted villainization in the media and in society is hardly effective either, as the perpetrators of mass violence are rarely without their supporters. In 2018, the FBI arrested a woman just before she could execute an attack of mass violence. Previous to her arrest, the young women had operated a Tumblr account devoted to posting images of various media deified American killers, and had even begun to correspond with a currently incarcerated killer, before leaving to chase stardom of her own (Wootson). In film and television, killers are something to be celebrated, with documentaries, films, and television series devoted to the crimes of various real life and fictional killers.

The fictional Batman villain “Joker” has inspired far more awe than he has fear from his many fans, with his face found plastered on anything from t-shirts to coffee mugs to bumper stickers. Remove Batman from the 2008’s film “The Dark Knight” and move the action from fictional city Gotham to real life city New York, and the Joker is nothing more a highly successful American terrorist and murderer. The “Dark Knight’s” follow up film’s opening was marred by an action of violence, which occurred at one of the film’s midnight showings. The perpetrator of the violence, with his dyed hair, was given the nickname “Joker” by his fellow inmates. In response to this, the killer told his psychiatrist, “they kind of turned me into a super villain. At least I’m remembered for doing something” (Meyer). It is clear that this fetishization of killers by American media is the major contributing factor to the proliferation of violence in America.

America’s worship of its monster is hardly something new, instead it is only more present today because of the rise of the internet and twenty four hour news cycles. The death of western legend and infamous killer Jesse James led to swarms of visitors to his residence, and his dead body photographed and sold as a souvenir across the country. A 1950’s American killer had his personal automobile travel the country as a carnival exhibit, which could be viewed by anyone for the price of 25 cents. The fascination with killers has been present in America as long as there have been killers to be fascinated with. It is only since the rise of media and the internet that the fascination has truly exploded and, with it, the number of killers, as well. The killer is America’s own monster, and America loves its creation. Jeffery Jerome Cohen in his analysis of monsters in human culture, called Monster Culture (Seven Theses), explains this love in thesis six, “Fear of the Monster Is Really a Kind of Desire.” Cohen explains that the “simultaniety of anxiety and desire, ensures that the monster will always dangerously entice.” It is such that as long as we continue to fetishize the monsters who commit heinous actions of violence that there will continue to be those inspired to commit violent actions of their own.

Perhaps it is time we, as members of American society, re-examine our interests and the media we choose to consume. There have been no signs at all that the increasingly frequent mass killings in America are coming to an end, and while arguments centered around gun control, religious and political extremism, and racism (contributing factors to many of the killings) continue, a major facet of the problem goes unnoticed. Theaters continue to fill for showings of films about villainous fantasies, and we continue to give our love to the real life killers of the past. It may be that this problem cannot and will not end in a society like ours, a society where a fictional city suffers a terrorist attack and we put the terrorist on a t-shirt.