Daenerys Targaryen was one of the main characters from A Song of Ice and Fire novels and its HBO adaptation, Game of Thrones.  In season 8 she became the monster that she was sworn to fight. How did this happen? Villains, according to Wiki are commonly in the beginning protagonists or forces of good or evil due to events in their lives.  Originally having been corrupted by other Villains they in turn desire revenge. Failed love relationships, betrayal, or any other unresolved traumatic experience makes the beginning protagonist question whether or not the good-side is worth fighting for.  (Villain Wiki ). In the case of Daenerys, it was revenge for the traumatic experience the lords of Westros made her go through. From the start, as a kid she had to go through the pain of losing her father and being exiled with her brother. Once she became of age, her brother sold her in exchange for an army.  It was only after her brother Viserys and her husband Kal Drogo died that she was truly free to make her own decisions.

A turn of events empowered Daenerys to put her ideas into a plan of her own.  With the birth of her three dragons, she had assistance and tools to shape the world in her vision. Daenerys’ vision was to take back Westeros and reshape the world in her eyes.   At first, her intentions where good. Free slaves ,feed the poor, and redistribute wealth. As time went on her campaign became more extreme. She started killing people who either betrayed her or would not kneel to her demands.  She formed many allies that would help her cause and go to battle alongside her, but even they were wary of the monster she was becoming.

Daenerys, in her quest to win battles lost two of her three dragons.  Realizing this was a loss of her strength and power, she opted to rule through brute force and fear.  On the Siege of Kingslanding in her final battle she rode into the city on her dragon and burned the place to the ground.  She went about killing hundreds of thousands of people even when her advisers told not to. This being the last straw for her friend and lover Jon made him kill her for the greater good.   Once Daenerys and Jon’s other foes were dead the kingdom of Westeros was at peace, and the name of Daenerys as the Mad Queen would become her legend.

To make Daenerys the final villain of this hit show was an unexpected plot twist that audiences did not expect.   Spectators could not help but cheer the young woman on through her trials and tribulations, but these were the situations that eventually led her to become the monster.   There is a reason why people do bad things. Good reasons give rise to their origins. In our world, we have a lot of wars and mass poverty that started somewhere, and its current effect keeps people down.  Only the strong can survive and fight to make it out of the danger zones to see any semblance of glory. An example of this is the wars in the middle east, and raising from the chaos is Extremist leaders. Theses leader lead a cause for a system they deem corrupted or inefficient in their eyes. As for Daenerys she was ousted at a young age because her father kingdom was taken over in a Coup d’état. This caused for her to live in a far away land where her brother would use her as a bargaining chip for an army. Daenerys was sold off to Kal Drogo in exchange for an army comparable to third world countries selling off their kids for money. When Drogo died, she become in charge of the remaining Dothraki tribe, the Strong members of the tribe didn’t expect her as leader leaving her to die along with the slaves. Daenerys told her Slaves that they were free and if they follow her now, it would be for their common cause making in Daenerys queen of a free world. It looked like all hope was lost until a miracle happened and her dragon eggs hatched this brought hope and moment to her cause. As her dragons grew, so did her army and her extremist ideology. She started saying thing like “I spent my life in foreign lands. So many men have tried to kill me, I don’t remember all their names. I have been sold like a broodmare. I’ve been chained and betrayed, raped and defiled. Do you know what kept me standing through all those years in exile? Faith. Not in any gods. Not in myths and legends. In myself. In Daenerys Targaryen. The world hadn’t seen a dragon in centuries until my children were born. The Dothraki hadn’t crossed the sea. Any sea. They did for me. I was born to rule the Seven Kingdoms, and I will.” (Game of Thrones), this was the start to a downfall.  Daenerys was According to villain wiki a Fallen Hero, one trait of a fallen hero is an extremist this is a character that has well-intentioned goals for the greater good, but their methods and ultimate ends are proven to be very extreme to the point that they become something that is greatly despised, whether by those whom they know, the heroes, or themselves. The actions may even potentially drive them to the dark side as well, which towards the end of the show, Daenerys ultimately did by burning down a whole city and setting her sights on the world domination.

Daenerys started her journey with no one, and as the show progressed, she started gaining more followers and allies, some of which she would call her family.  Daenerys was the mother of three dragons. Names, Drogon after her late husband, Viserion after her recently dead brother, and Rhaegal after her late older brother.  She loved theses dragons as if she gave birth to them, as she came out of the fire she essentially did. She would teach, feed, and raise them as any mother would. Daenerys also had trusted advisers in Sir Jorah and Missandei who always had her back.  Daenerys’ power and her journey had setbacks throughout the show. It wasn’t until season 7 when she faced tragedy losing her dragons. In season 7 John and company went beyond the walls to capture a White Walker, which is an ice zombie to show proof to the world that the threat of them is real.  As events took a turn for the worst, Daenerys flies down with her three dragons to save them. The rescue was a success but at the cost of one of her Dragons. With the death of Viserion Daenerys lost on of her children something that no other should go through. Losing a Child would make any parent go mad according to tommy.org a Wales pregnancy nonprofit organization, which says “many mothers said that after losing their baby they could not think straight and felt unable to make decisions.”  This could have caused Daenerys to make the questionable decision that she made. In the show, she lost a total of two dragons, which equals two children in her eyes. In Season 8 Sir Jorah died trying to save her and Missandei died at the hands of Queen Cersei, her main enemy. With the death of her two dragons and friends, it was the final breaking point for Daenerys.

The last causal for Daenerys turning to evil was an easy one to detect, jealousy.  From the start of her campaign, her one goal was to become ruler of Westeros. Everything was going smoothly until she landed in Westeros and learned that the people do not respect foreign rulers.  Even if Daenerys was born in Westeros, she was raised by foreigners, grew up with foreigners, and had a foreign army. Compared to the other rulers like Cersei, she did not have their respect. After the battle with the White Walkers, Daenerys could see the Northerner’s respect for Jon.  Daenerys wanted that respect too, so she came up with the idea, if they won’t like you then they will respect you by fear. In conclusion, Daenerys Targaryen was a complex character who used her emotions as fuel. There are better traits than emotions to fuel leadership. Objectivity is better than feelings when becoming a leader.  With Daenerys’ rough origins, traumatic losses and jealousy it was not hard to see way she became a monster.

“Coping with Grief after the Loss of a Baby – for Parents.” Tommy’s, http://www.tommys.org/pregnancy-information/pregnancy-complications/baby-loss/stillbirth/coping-grief-after-loss-baby—parents. 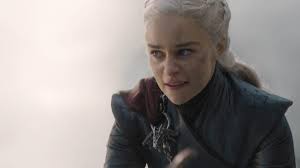