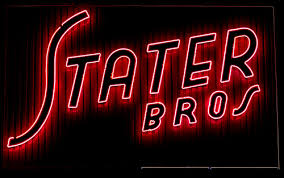 Stater Brothers created their first grocery store in Yucaipa California, on West Yucaipa Blvd, on August 17th 1938. After making the company from this little store in Yucaipa, it was then scattered out in all of Southern California. In 2005, the company was “first listed on the fortune 500, and was rated as the best place to shop for groceries among the full service supermarkets chains in Southern California. In present time, it has now over 169 supermarkets locations, and has approximately 18,000 employees and an annual type of sales around 4 billion dollars. While Stater Bros was making billions of dollars, they have then made a 2.3 million square foot corporate office and a distribution office in San Bernardino California on a 200-acre land. This much larger distribution center then made Stater Bros become more of a stronger based company around Southern California. After this all became into work and progress, Stater Bros. has become a bigger, stronger of a company in all of Southern California and the “largest privately owned supermarket company chain”, going 81 years strong, but some may ask like, what kind of good does Stater Bros do to the environment surrounding them? Or What type of actions does Stater Bros do to the community around them? These questions are yet to be answered.

Some may see Stater Bros being the biggest company making fortunes, but some may ask, “what types of actions do they do for the community around them?”. Based on facts from CEO and specialists, they don’t just help themselves, they have many different types of charities for people, and kids in hospitals, or have cancer. Stater Bros has donated over 15 million dollars to countless local organizations and causes towards benefits to health hunger relief, children’s well beings, educations around Southern California, and the help for our nations veterans. As to what Jack Brown says to others, “Our communities need more help now than ever before, so join with us as we help care for the communities we serve!” The biggest and most signature event was from Dave Stockman, tournament host and former PGA Champion, that shared Jack Browns vision of giving back to the community, gave charity to the biggest golf event charity Stater Bros has donated to, both in execution and as well as fund raising towards the community. One of the Charites that really mean a lot to caring for the community, I for one was involved in this charity while I was first working at Stater Bros, is the charity called The Believe Walk Charity, that is meant for towards half the men, and one third of woman that develop cancer during their lifetime. So far, Stater Bros has donated over 3.0 million dollars over the last 8 years towards the cancer fighters. The Believe Walk is based on trying to be directly impacting lives, by providing funds to improve the care and support services for cancer patients and their families in the Inland Empire communities of Southern California.

One question that most people ask about this big successful company in Southern California, is, “what kind of good does Stater Bros do to the environment surrounding them?”. Jack Brown had a main goal with Stater Bros stores, that all of the side departments are saving up! Saving up on energy, and water supplies. Jack Brown says about helping out on the environment, “We just don’t do business here. Our people live here. So when you are part of the community, you do the things you need to do to make the community a better place to live. We just don’t do business here, we live here. That’s why we’re so dedicated to making it a better place for my kids and grand-kids.” Stater Bros saves up enough energy to power up to four thousand homes in California each year, being involved in participating in a States California Voluntary Demand Response Program making a lot of deductions at each Stater Bros store and the main Department Warehouse, having minor reductions on the lighting, water usage, air conditioning, and other types of equipment. Every summer at every Stater Bros, they always have a thing for the community to turn off the lightings in every store from the time it opens till around 4:00 pm making it save up of 60 percent of energy in Southern California. They have this type of Green Waste that is a composting compound that removes nearly about 40 million pounds of waste from landfilled locations each year for the community. Each year, Stater Bros donates over 3 million pounds of food to local food banks each year towards the elderly or the poor and homeless shelters. “Plastic bags, film and shrink wrap from our stores and distribution center are compressed into bales and recycled” as to what the past CEO Jack Brown wanted to make a change in for the community, and recycling over two million pounds of recyclable plastic in 2014. With recycling over millions and millions for our environment, Stater Bros had received an award for the Best Emissions Rate Award from the US Environmental Protection Agency’s Green Chill Partnership. Stater Bros is also the only regional grocer to have eight stores that have been EPA Green Chill-certified at the Gold Level, making it the most promising and most helpful company towards the environment of Southern California.

Stater Bros was never meant to be about the company, it had one goal and forever shall have one main goal, to always car for the customer, and help anyone that needs it. Jack Brown wanted everyone to see Stater Bros as the most helpful, and green thumb of a company. Throughout the years, he made it happen, whether it was based on helping the community around Southern California when it comes to charities or donating with millions of dollars to cancer, and saving up being a green thumb company, saving up on energy, giving power energy to the community, trying to save up on water, recycling, reusing everything for and to the company, being the best Stater Bros has been over the last 80 years ever since its first opening in 1938 in Yucaipa for everyone’s enjoyment and service towards you and your community, and environment around you, the Stater Brothers way.

http://www.believeinlandempire.com/site/PageServer= learn why we fundraise