The Altruistic Nature of Pure Children

The colorful and comedic Mitsuboshi Colors originally written by Katsuwo and Published by ASCII Media Works was created for an audience to laugh and enjoy without much thought to what was going on entirely. The story focuses around three elementary school girls, Yui, Sat-chan, and Kotoha, and their daily escapades under the guise of the “Colors”, a group those three formed to protect their town. Despite their desire to protect the town, the three girls typically end up doing something ridiculous and comical while playing games or attempting to solve a perceived problem. This analysis will focus on the fifth episode in the series for a more direct analysis. This analysis will break down the meaning behind the story as well as the motives of both the author and the characters portrayed. 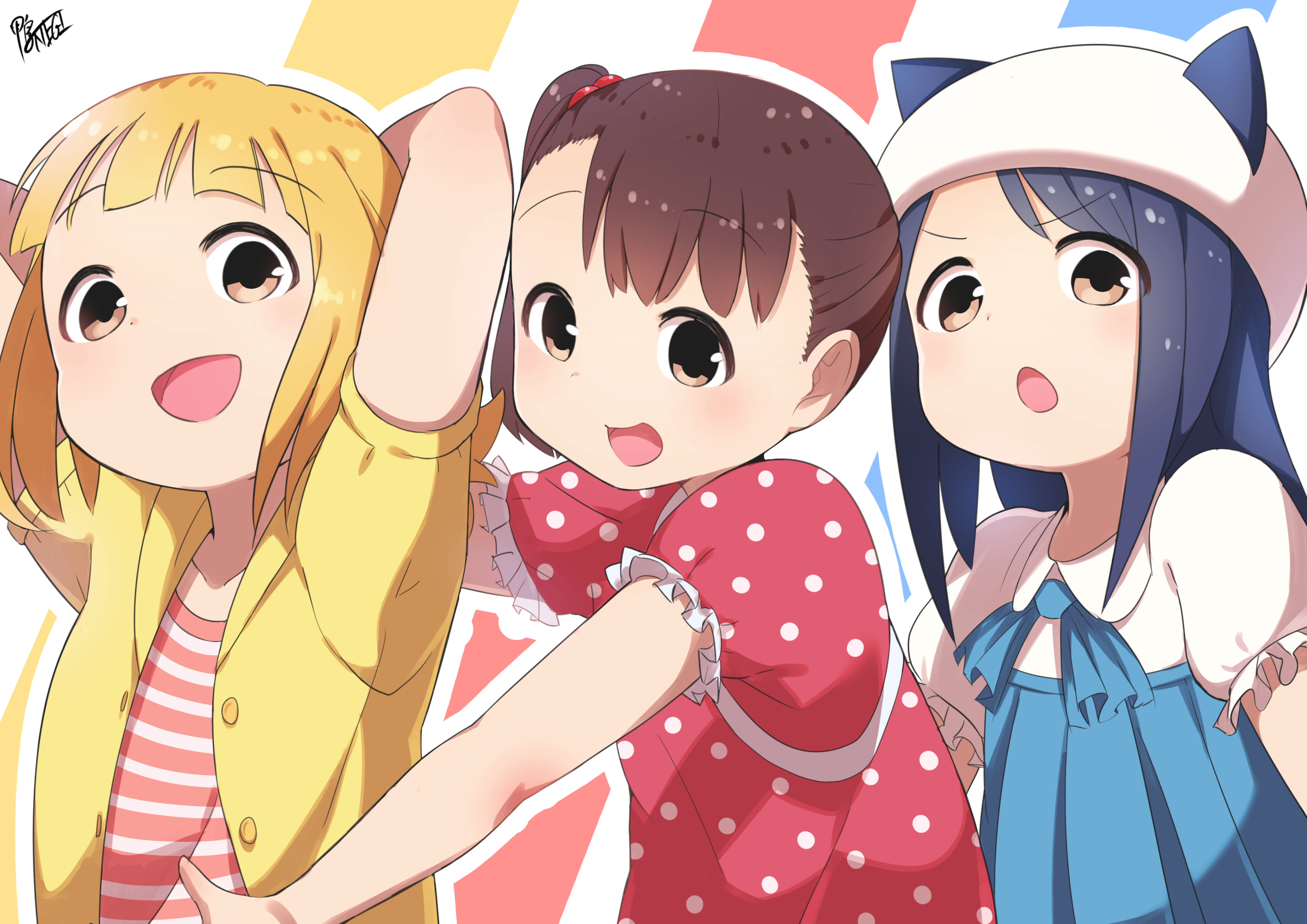 There is not much ethos to be represented in this story besides the believability of the main cast due to the relationship between their age and their actions. It seems typical for a group of young girls this age to be adventurous and pick up role of protecting their society from the bad things in this world. In fact, Warneken from Harvard and Tomasello from Max Planck Institute for Evolutionary Anthropology both say, “…from an early age human infants and young children are naturally empathetic, helpful, generous, and informative” (Warneken and Tomasello 401). This quote means that children are naturally altruistic without much motivation to be that way. The inclination for three young girls to help their society can easily be related to innate altruistic desires that humans tend to display. This idea creates credibility for the author to fully demonstrate the behavior patterns of young children.

Because this television program was created as merely a source of entertainment, there is not much to be said of logos. It is in fact the lack of logic and reasoning that brings a comedic form of entertainment. If there was logic to be pointed out, it would have to be the logic behind the altruistic behavior of the three girls, Yui, Sat-chan, and Kotoha. In the fifth episode of Mitsuboshi Colors, the three girls are in fear for the safety of the animals at the zoo, especially the elephants, because of a sad story depicting the gradual starvation and eventual deaths of the elephants in a zoo during a war. Because of this saddening story, the three decided to go check on the elephants at their local zoo in order to verify whether or not they were nourished. This relates to the topic of altruism especially in children. Sat-chan went so far as to take an apple to the zoo in order to feed the elephants in case they were malnourished despite no apparent reward for doing so. This can appeal to the logical side of altruistic behavior by representing a simple problem solving scenario in which the main cast is given the opportunity to “save” the animals at the zoo by checking to make sure they were all well taken care of. The three girls also attempted to view the economy of the zoo to check for the economic availability to feed the animals by viewing the possible ways the animals were fed. Kotoha, in this episode, deduces that the rapidly reproducing house mice may be used as a source of food for the other animals because of the relationship between the current amount of mice and the speed of reproduction. Although wrong, Kotoha still tried to rationalize the well-being of the zoo animals through food source. Although logos is not especially used, it can show up from time to time when viewing the material from an objective standpoint.

This television program especially impacts the audience at an emotional level using techniques related to pathos. Because this is a source of entertainment rather than information, the television program gathers attention using primarily comedy. In the fifth episode of the series, the three girls read a sad book, as mentioned earlier, and are then persuaded to check on the elephants because of it. This gives the audience a want to continue observing the events that are about to unfold to see what happens. The audience may already be aware of the very narrow possibility of anything bad happening at the zoo, but are still inclined to view the events transpiring for the simple appeal of a laugh. There are many occasions in which the three girls, Yui, Sat-chan, and Kotoha, make comical gestures or noises as well as puns for their own amusement which, in turn, brings amusement to the audience. In the beginning of the episode, Kotoha is presented with a kendama, a toy similar to a ball-in-a-cup, and proceeds to play with it. The audience can find humor in how Kotoha neglects its intended use as a toy and instead uses it as a weapon, similar in style to a mace, to swat paper airplanes and a balloon out of the air while feeling an overwhelming sense of delight in her actions. This type of scenario is found to be quite humorous by many viewers. The television program mainly uses a sense of humor to bring in more viewers.

In a way, the three main characters from this television program can be related to the three appeals of logos, pathos, and ethos. Yui could represent ethos as she is considered to have a typical behavior for a child for her age. Yui also questions the conclusions the three of them come to to evaluate the credibility of the situation and their reactions. Sat-chan can be depicted as pathos because of her constant appeal to emotion through humor. Throughout the episode, Sat-chan is seen making several puns and jokes as well as instigating a humorous scenario. Logos can be represented by Kotoha who can be seen making deductions throughout the episode. Despite most of her deductions being wrong or inaccurate, she still does use logic to try to come up with a reasonable answer for the situation. Although the three of them display signs of pathos, logos, and ethos, it is possible to assign them a primary attribute.

The primary audience of this particular program can easily be identified by observing the material of the show. Because the show is about young girls and their daily adventures in their town, it can be concluded that the targeted audience is young folk who simply want to enjoy the humor presented in the program. The audience can also include any others who enjoy clean comedy and/or slice of life. Sat-chan is known for always saying the word “poop”, which can be inferred from the scene eighteen minutes into the episode where Sat-chan notices that a giraffe in the zoo had pooped and both Yui and Sat-chan had a short conversation on how it was unusual for that to be the first time she had said “poop” all day. The type of humor in which crude and childish words, such as “poop”, are used to elicit a positive response from the audience is typically geared towards children who find the simple use of these words to be hysterical. This material could also be geared towards an older crowd who find delight in watching the misadventures of a peaceful youth during a time in their life in which there are little to no worries. The material could be attempting to appeal to both audiences, but this information cannot be verified without the author’s input into the matter.

Mitsuboshi Colors is a piece of entertainment in a society with highly developed forms of communication, allowing ease of access for many modes of entertainment. To excel in an economy with much similar entertainment available, this television program had to use all the tools at its disposal to appeal to an audience willing to put forth the money for the people who put this program on the air. The program primarily used methods of pathos to make its audience of young and old laugh and enjoy the warmth of youth. The program could not use much of the methods of logos or ethos because of its almost strictly comedic nature, but both logos and ethos could be seen in the program even if it was not intended by the author. Logos could be seen by observing the somewhat altruistic nature of the three young girls to understand their motives and their actions. Ethos was observable through the predictable actions of the three children and how they compare to children the same age in real life. This gives the show a realistic basis for the events to take place. Despite not being able to rise to the level of popularity of many other television series, this particular television series shows a great deal of the use of pathos, logos, and ethos to sell their product to their audience.

Cialdini, Robert B., et al. “Reinterpreting the empathy–altruism relationship: When one into one equals oneness.” Journal of personality and social psychology 73.3 (1997): 481.

This article goes over the theory of altruism in humans and its relationship to empathy. It investigates how humans are somehow seeking out oneness by helping others. The article is peer reviewed, proving its credibility. I use this article to learn more about altruistic behaviors.

Warneken and Tomasello explore the nature of altruism in children in this article. The two describe how children are naturally altruistic and compare them to chimpanzees, who seem altruistic as well. The article is peer reviewed, proving to be credible. I use this article to understand the altruistic behaviors of children.

The article covers altruism on a wide level and its relationship to empathy. It uses several theories to explain altruism in many perspectives. This is a peer reviewed article, showing its credibility. I use this article to more fully understand altruism.

This television program is the media being analyzed.