There are many things people don’t see in the everyday world, what someone may go through in the twenty four hour days. There can be many emotions flowing around a classroom and a lot of you wouldn’t even know it. How empowered teachers are and how some may take advantage of it without even knowing it just as Ms. Price does. Little does she know what is sayed that one time may affect how the student acts for the rest of the semester, what would you do if a teacher put a rotten smelling sweater on your desk forcing you to put it on, or calling you a piece of shit. It sure wouldn’t make you feel good, for example in the past teachers have put me down and told me I wouldn’t amount to much. The sweater the teacher put on Rachel’s desk on her birthday really affected her day. How the teacher just assumed it was Ratchels after one girl says so. Then once the sweater was given back to its rightful owner, it was like nothing ever happened and the day went on.

The little things that happen everyday can affect someone so much, it can be taking to long on a text back,  or not getting the right birthday gift and alot more. Well in Ratchels Situation she was given a sweater that wasn’t hers, it had a cottage cheese stench to it and had been in the lost and found. The teacher being so overpowering and listening to Phyllis Lopez that has hate towards Rachel and says that its rachels sweater. The teacher immediately walks over to Rachels desk on her birthday and drops the stinky old sweater. It was the day rachel should be having the best day of her life and all that turned around very fast. Now she has a stinky sweater on her desk and is being forced to put it on orelse. I feel she wanted to say something so bad, stuttering to talk she did not want to be on Mrs. Prices bad side. There where many times Rachel wanted to speak up but couldn’t, in front of the whole class the teacher would have made it even worse than it already was. When rachel tries to hint that it wasn’t hers she nudged it off the desk and that’s when Ms. Price steps up and forces Rachel to put on the sweater. All because Phyllis Lopez couldn’t claim the sweater right away and because Syllvia said it was Rachel’s, it went on a lot longer than it should have and made Rachel’s eleventh birthday feel like she was three again.

Mrs. Price is holding up a Sweater in the class and is asking everyone in the room whos sweater it is, the classmate Sylvia Saldivar that doesn’t like Rachel, says “I think it belongs to Rachel.” So she walks over and said “I remember you wearing it once” and sets the ugly old sweater that belongs by the jump ropes right on rachels desk. Just because Sylvia put that in her mind the teacher took it a lot further. The teacher couldn’t just let Rachel put the sweater down and pick it up later, it had to be on her right then, sounds a little controlling if you ask me. There where many ways she could have gone about the sweater, maybe setting it down and saying pick it up after class if its yours? It might of been a little better outcome other then ruining an eleven year old girls birthday with a stinky old sweater. It may not of effected Mrs. Price at all but it sure made Rachel cry in front of the whole class and look like she was three. Her whole class seen her cry just because the situation wasn’t acted how it should have, only if they knew the rightful owner from the start. Also, listening to Syllvia didn’t help at all either it made the situation a lot worse, all that because the two gals have a little hate for each other.

Only if the sweater was gone about in a different way it wouldn’t have been such a bad day for Rachel, what if it was thrown on my desk? Only if  Phyllis Lopez would have claimed the sweater right away it could have been a lot better for her birthday. It had Rachel sick just about all day while it did not affect Mrs. Price at all and went on with her day. How much that sweater might of meant to Phyllis nobody will ever know, but in the back of her mind she just didn’t want to lose that treasure again. You ever hear the saying “another one’s trash is another one’s treasure”. One really wanted that sweater back, and was ashamed to claim it due to it being so dirty and beat up, while Rachel is trying to throw it on the ground and not claim it one bit. You never know a couple days later could had been a bad day for Phyllis, What if the sweater had been a handy down by her family and they really treasure it. If Phyllis would have let Rachell take the sweater home it might not of ever returned to the family and it would have been a lost treasure. Most likely thrown in the trash as soon as Ratchell got out of eyesight.

We have all had those days where it feels like everything is going terrible and that is just how Rachels day was going, little to no breaks just bad stuff coming her way. As the sweater got Sat on her desk Rachel knew it wasn’t going to end well. Mrs. Price giving her know option but to put the sweater on “because she’s older and the teacher, shes right and im not” . So she did just as the teacher asked. Even it not being hers and stinking terribly she still was not getting a break. The best part is right before the bell rings Physill remembers that the sweater is hers and takes it back. So at the end of the day all the bad stuff that went on was caused by Phyllis not claiming her own sweater. 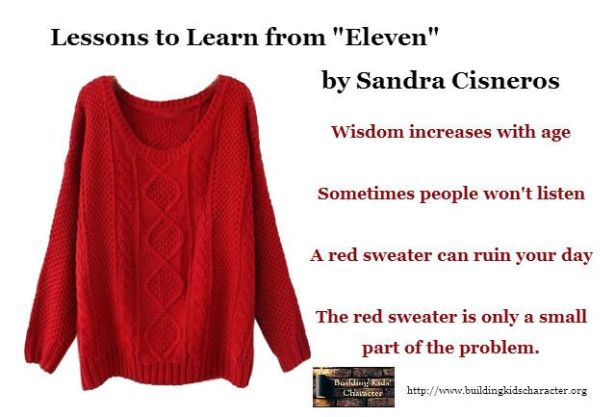