Crawling out of hidden crevices, craving, starving, begging for something to be in their stomachs, arms stretched out, reaching for you, clawing at you for something to eat… you’ve seen this every day when you see the skinny homeless man on the corner asking for help.  What can we do as a nation, as an individual to solve National Hunger or even World Hunger?  Being an American myself who grew up in a middle-class home and never wanted when it comes to food, I find it hard to imagine people starving just hoping for food.  Its even harder to believe that it happens right in our own backyard, yes, we have people starving on the streets here too.  It’s a place in Los Angeles called Skid Row. 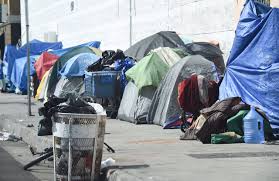 “Skid rows are thus notorious as spaces of rough sleeping, with temporary pavement encampments or ‘cardboard cities’ offering refuge for those who congregate in these areas” (Hubbard).  Skid Row in LA is a community of homeless people, many of which are malnourished and not getting proper care.  Even in my home town, every day driving home, I see a man, whose skin has seen too much sun, scars that his long stringy beard can’t cover, and bones that skin hangs loosely on, seeing almost every detail of every bone that his loose clothes fail to cover.  To the best of my knowledge this man served our country at one point in his life, and I can only assume this man suffered some trauma where living a “normal” life is now impossible.  I bought him a meal from McDonalds one day and this made me wonder something powerful, I may have fed him today, but how can we as a community, we as a nation, we as a race fix this so this man doesn’t go hungry some nights, when a stranger decides not to offer a little help?

What if we double the food we currently have?  Now, you are skeptical, I don’t blame you, and I can assume your train of thought right now is thinking how in the world are we going to double the food we have available when we already have so many starving people?  We may have a way to do this, it’s a project called the Veg Series.  Veggie is the module on the International Space Station where they are going crops in space.  They have “The Pick-and-Eat Salad-Crop Productivity, Nutritional Value, and Acceptability to Supplement the ISS Food System (Veg-04) investigation is the next step in efforts to address the need for a continuous fresh-food production system in space” (Massa).  Veg-04 is the latest of the series on the Veggie Module, where they have started growing many different crops.  If we can implement these modules on much grander scales on Earth in places that crops are hard to plant due to overheated areas or underheated areas, and/or soil conditions we could start a steady supply of food for all nations. 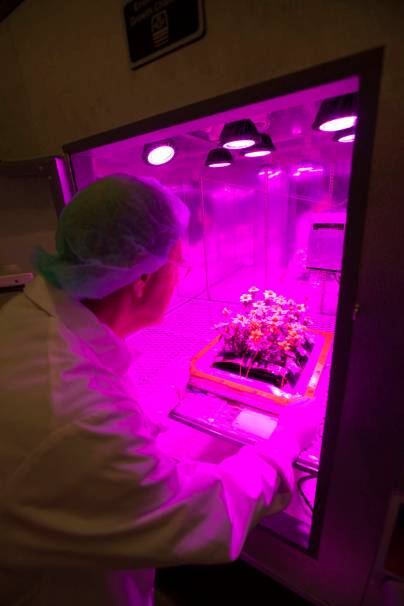 What separates Veggie facilities from a large green house?  Well, Veggie crops are grown with Red and Blue LED Lights, they also add Green LED Lights purely for color to appease our visual appetites instead of these plants getting direct sunlight.  These plants are grown with a prepackaged pillow that contains all the necessary nutrients instead of soil.  Also, because they are in a controlled environment they are actually cleaner and contain less bacteria and other harmful substances that we have grown used to with our soil-based crops.  “Through numerous tests the Veg-03 science team has refined the pillow concept and selected growth media and fertilizers, plant species, materials, and protocols for using the pillow concept in Veggie to grow healthy plants that can provide crew with food and recreation” (Massa).

NASA is currently working with Dubai testing a version of Veggie.  “I’m working with countries like Dubai, who have the problem of importing almost 95% of all their fruits and vegetables because of the horrendous heat and the environment for growing things there” (Zamprelli).  They are doing this to help Dubai grow their own plant-based food, and in doing so furthering their development of Veggie.  The general blueprint for Earth Veggie is a giant warehouse like module that contains massive crop selections.  They will use the sun to power the facilities and to grow these crops to feed the population.

You may be thinking now that there is one major flaw in my logic, money.  Where is all this money supposed to come from?  You are correct, money is an issue here, these giant warehouse modules are not going to be cheap to make, however once they are built they facilities become almost self-reliant.  Assuming the government cares enough about its people to want to keep them all fed and happy most likely they will invest in the Veggie facilities to save lives.

Other critics of my logic is instead of doubling our resources, why don’t we just kill half the population randomly.  Well, that would help to solve world hunger, but not only is genocide generally frowned upon, but with this new possibility for food, it would be the humane way to go, saving lives and filling bellies.  Also, with the universe always expanding we can always continue to colonize other plants to avoid over population when we develop the means to do this.

We could keep sending money to charities for starving children in foreign countries, there is nothing wrong with feeding a child one time.  However, if we could permanently fill that child’s belly we as a race need to do whatever we can.  So, what can we as a nation, as an individual do to help this succeed?  When it comes time to vote, we can keep this in mind, and vote for those in office who want to promote NASA funding, and spread awareness of this as a solid solution to World Hunger.  Once the Veggie facilities start being implemented in all countries all humans will be fed and we can start focusing on exciting things, like space travel.

The article “skid row” is a scholarly source that helps define the North American term for Skid Row.  I’m using it to help me define skid row and to help people see that we have hunger in America too.  Its reliable because Phil Hubbard is a professor of Urban Social Geography.

I’m using this article to show that you can create crops anywhere if you have energy. Massa explains how the Veg-01 works and what it is being used for.  It’s a credible and scholarly source because Massa has a PH. D in food production and also is a NASA Scientist.

This article shows the statistics of World Hunger.  Specifically, this article shows which countries are having the biggest problems with hunger.  I’m using it to show a number figure of all the people in the world who are starving.  It’s a reliable source because its collaboration of people trying to stop world hunger, and it cites the United Nations news release.

This interview with Massa tells directly what they are doing with the VEG-01.  I’m using this to help share how it keeps plants alive without the use of natural sunlight and soil.  Its scholarly because Massa herself describes the VEG-01.

I’m using this article to show where we are with “Veggie”.  Its scholarly because its provided by Gioia Massa a NASA scientist who has a PH. D in Food Production.  The article “Pick-and-eat Salad-crop Productivity, Nutritional Value, and Acceptability to Supplement the ISS Food System” explains what Veg-04 is and what its purpose is.

The youtube video “Space Station Live: Lettuce Look at Veggie” is scholarly because its interviewing Paul Zamprelli who works for Obitec the company that developed Veggie.  He explains some things already known about Veggie, but he also shares about their plans for Veggie involving Earth.  I’m using this to provide proof that its already starting in places that is known for not being able to grow their own crops due to heat conditions.