On March 9, 1945, one of America’s most famous and heinous serial killers was born. One man viciously tortured and killed 10 random victims. He would stab them multiple times and in many cases, would strangle them with ropes, plastic bags, and belts until they suffocated. (Crawford). This man was named Dennis Radar and has been known as the “BTK killer”.  The acronym stands for “Blind, torture, and Kill”, which was his method for killing his victims. He also gained the name for writing letters to the public anonymously after each murder, signing off with this short name. Dennis Radar grew up in Kansas along with three other siblings. (biography.com Editors). Right from the bat, Dennis Radar was not an average citizen. At a young age he tortured several animals and had odd sexual fetishes with women. Rader is truly a monster in our society, but the question lies heavily on the reasons for his actions. Analyzing Radar’s childhood in torturing animals and mental instability, his former job as a navy force and what was left after, and his yearn for attention in the public by taunting police officers about what he has done can give us a keen eye of what caused Dennis to become a monster in society.

The necessary cause of Dennis Rader’s heinous acts and monster representation could be tied down to his mentally unstable health that has been dismissed as a child. Rader grew up in Kansas along with three other siblings. He had a decent family life but at a young age, Rader showed some abnormal and unstable traits. He would torture and hang the cats and dogs at his farm. (Biography.com staff). These actions show that there is something definitely corrupt about his mind already. If there was a chance that his friends or family were to see, he’d be able to get some kind of intervention that could aid his desires to develop farther. Furthermore, the article also states Radar would steal women’s underwear and keep them in his room. He also admitted that he would fantasize about torturing and killing women. (Crawford). This shows that Rader’s personality is a very abnormal and dominant personality, especially towards women. The abnormal and strange deeds along with his scary desires portrays this is a root cause for his actions. If possibly he could have had help in aiding his desires with the help of a psychiatric, it can be that these desires and deeds he had would not expand and grow deeper. The mental instability and desires he had is one of the necessary causes of his heinous actions.

Along with the BTK Killers childhood, his previous employment could be another remote cause of his actions. A documentary geared towards Radar’s life explains that in his employment, Radar was enlisted in the navy force and had a high position. Afterwards, he quit and became a compliance officer. (A&E documentaries). It states that the reason he took this job could be due to him satisfying his desires of being controlling and powerful. During his time here, he was known as being the most “disrespectful, crude person”. He would give citations to women only about the dogs in the neighborhood.  In the video on minutes 37:10, a fellow acquaintance of the BTK killer talks about how Rader would “look inside of her house and stare at her”. He had put down one of the residents dogs for no particular reason. This can perpetuate the fact that his former job caused him to feel more superior and powerful, thus eventually causing him to kill.  The former job he has had can be a reciprocal cause to why he committed the crimes because he had a high position in the navy force and after he wanted a more higher position that can help fulfill and grow his dominant sexual desires.

Furthermore, after he went out of the navy, he was left with no job. He tried to enroll back in college but “earned nothing higher than a C”. He was left with nothing to do and after, he mentions that his fantasies have been going crazier than they have ever been before. This eventually led him to satisfy those desires and started off by staring at a neighborhood couple and imaging him torturing and killing them. (Crawford).  This comes to show that the isolation and loneliness of Radar’s life has got him to become left with nothing but his own thoughts and needs to feel powerful. He had nothing left to preoccupy his desires and shortly after that, he committed his first brutal murder. This illustrates that having no job and not being preoccupied can be a sufficient cause as to why he had projected the fantasies of torturing and killing citizens into reality.

Another reason as to why Dennis Rader committed his acts and is known as a monster is his yearn for publicity and attention. Rader taunted former police officers about what he’s done in order to gain publicity. For example, an article analyzing Rader’s past states that “Seeking attention, Rader sent a letter to the Eagle, taking responsibility for an unsolved 1986 murder”. He’d constantly send out letters about what he did to the public and even wrote a book. (Rosen, J.).He’d leave notes to public libraries and tell them to refer to him as the “BTK killer”. In another peer reviewed article, it states that “serial killers in our society are treated as celebrities.” (Wiest). Serial killers get interviewed, their pictures get shown everywhere, and there name gets known just like celebrities. Rader’s name, BTK killer, was and is known after the actions he committed. At the time, “BTK killer” was well-known and discussed. A remote cause for Rader’s action to become a monster could be because of the publicity he was seeking. The actions of him going out of his way to admit that he did the crime and sending out letters to public officials could mean and indicate he wanted to gain attention for his actions or possibly his name known to the public. This shows that this can be a remote cause and one of his main reasons as to why he has become today’s monster. He wanted attention, so he killed more people. After that, he wanted more and more attention. This shows that this can be a reciprocal cause as well as a remote cause into why he is a monster. 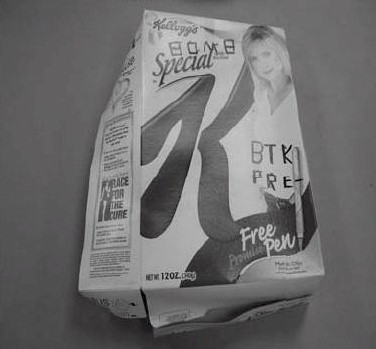 Dennis Rader fits the definition of the monster for the actions he has done. In Cohen’s Thesis 4, they state that the monster “dwells at the gate of differences”. (pg. 7). For example, in a short story, it discusses how the monster “broke a sexual taboo” (pg.9)  and “embodies sexual practices that must not be committed, only through the body of a monster”. (p. 14). This can correlate with Dennis Rader’s actions. Rader tortured, blinded, and killed all of his victims. It states that most of his victims were women and he’d find sexual pleasure in torturing and killing them. (A&E docs). Rader definitely broke a sexual taboo and something that should not be committed, but he was also able to do it through the body of a monster. For him, the body of a monster was his cover as the “BTK Killer”. Furthermore, Rader fits Cohen’s Monster thesis 5 because the monster “polices the borders of which to cross”. It shows what is acceptable and is not acceptable in society and Rader’s actions help society show what we can and can not do.

Overall, it is very evident that Dennis Rader is considered a monster today and fits Cohen’s seven monster theses. His mental instability and dominant powerful trait starting from a child, his previous job that sprouted his fantasies and desires, and the aftermath of his actions and publicity give us a brief explanation of what might have rooted his actions on why he committed such evil acts. The actions and deeds he has done is still widely talked about and known in our society today. He has opened our eyes on crime by his malice acts.

This is a documentary film about Dennis Raders life. They have gathered numerous reports from several different sources and real life people and victims to talk about Dennis Rader’s life. This documentary discusses all about Dennis’s life. I will use this source in order to help prove why his former life as a job showed evidence in him leading up to his image today.

This article is about the serial killer Dennis Radar, known as “The BTK Killer”. It  discusses how the mind of Radar and what might have precipitated his actions in          becoming a serial killer. I will use this to start out the background of what he went  through and how I can use it to explain the cause of his actions. The article is credible            due to the source is funded by A+E, a government funded program that links with the      juvenile and jail system. The author is also a credible author for she has been studying          crime and criminology.

The reason for using Cohen’s article is to show how Dennis Radar has been referred to      and known as the BTK killer and a monster. I will be using this to discuss how BTK  killer is considered a monster in our society today and how his actions and traits have led            up to him being a monster.

4.) Rosen, R. (2014). The Atlantic.  https://www.theatlantic.com/technology/archive/2014/01/the-floppy-did-me-in/283132/ Accessed 07 July 2018
This article is about Dennis Rader’s former life. It states that he’d constantly send out letters to the public after his crimes and also taunted police officers. I will be using this source in order to show the possible reason for him murdering was tied down to him wanting to gain publicity and attention. He wanted his name to be known. The author is credible due to being a Senior Writer and writing 45 articles.

This article discusses how Serial Killers in the media are represented in the mass media. They are either referred to as monsters or celebrities. This source can be easily used in order to explain how or why might have drove Radar to be a monster.