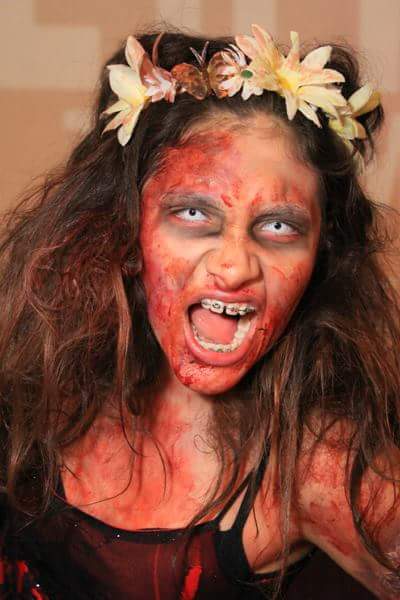 For as long as I can remember I have always had a love for scary things and makeup. Around the age of 12 I started to get into special effects makeup like in the horror movies. Making burns, bruises and cuts was a typical Saturday for me. Within the first few months of dabbling in special FX makeup, my mom showed me an ad for the “IE Zombie Beauty Pageant”. This was basically a beauty pageant but as a zombie,contestants had to be in full zombie makeup and complete the opening, talent, Q and A and evening gown portion of the competition. As soon as she told me about it I started working on my zombies background, how I got infected and just really building up my backstory. Our first meeting was very nerve racking for me, I was so excited then getting incredibly nervous when I saw the people I was competing against. I had only been doing this kinda makeup for not even 5 months and now I was entertaining a contest with grown women (me being the youngest and the second youngest was 21), I thought “ These women have probably been doing makeup for as long as I have been alive, there was no way I could really compete with them”. The fear of my makeup looking like a total amateur made my stomach drop and my heart just stop. “I really did not think this through” I thought to myself, “No way was I was going to go through with this”, the embarrassment was too much. I stayed for the rest of the meeting to see what this thing was really about. We had dance routines and costume changes it was so overwhelming and no one even mentioned the makeup not once.

Later after going home going over the schedule again and again really contemplating if I was going to do this I saw the first mention of the makeup. I initially just wanted to it for the makeup, thinking we might have workshops or something to do with even the basics of makeup basics but no. Makeup was all self done or if you were lucky enough like the eventual winner and the runner up you knew someone who could do your makeup professionally. I was not so lucky. So after school I would hurry home do my homework then practice some makeup, hurry take it all off then goto rehearsal (which was 3 hours long) then come home around 11 at night then restart everything the next day. It was a month of rehearsal and it was the longest month of my life. For the first time I wanted October to be over. I didn’t feel I made ANY improvement on my makeup and that I would make the biggest fool of myself. I had been YouTubing and recreating the same look over and over again using extremely foreign materials like liquid latex, molding clay, spearmint glue and even attempting several times to make my own body paint. (I was on an extremely strict budget) I was clueless on the process, just knowing my very basics of colors and trying to remember when I mix this and that it makes it look like this.

It was coming down to the last two weeks before the pageant everything was getting real now.  MTv was following around one of the contestants, doing behind the scenes of everything. I knew I was going to be on tv, but the thought of the off chance that my makeup might be sent me through a whirlpool of emotions. They wanted us to help get the word out, wanting us to go downtown with full face of makeup and pass out flyers. This was it I thought, everyone is going to see how tragic my makeup was, I was just going to drop out so I didn’t have to embarrass myself more than I was going to tonight. Right after getting  home I started on my makeup. Damn I thought “I only practiced the same look and I couldn’t copy the same look for the pageant:” I was so lost, how many zombie looks could there be? So I quickly googled zombie and the first thing that came up I tried so incredibly hard to recreate on the spot, spending almost 2 hours doing it. Starting then redoing certain cuts or burns, putting a hairdryer to my face trying to make the latex dry without catching it or myself on fire.

Finally this was as good as it was going to get. My pale face with blue and green hues all over, ash black burns on my forehead and scar on my neck. I didn’t look completely hopeless, wishing that was the case. After being down there for less than five minutes the unimaginable happened, people were approaching me, complimenting me. They actually thought it was good, they liked it. Telling me how disgusting it was and how scary I looked (these were the best complements I could ever ask for) asking who did my makeup and being in total Awe when I told them I did it. Under all that zombie makeup was an extremely happy little girl. Even if they were lying just to make me feel better at that moment I felt something that I hadn’t felt in the longest time, confidence. Those total strangers gave me the courage to go through with the pageant.

The day of the pageant was the first time we did  an actual dress rehearsal, full makeup and costumes. This is it I thought “time to make a complete fool of myself”. I felt as though I was jumping into a sea of hungary sharks, ready to be torn apart. We spent the whole day there doing our makeup and rehearsing again and again and again. With all the hot lights and the dancing with our face and body full of makeup we started to wish we were dead. Next thing I know we were just an hour away from opening the doors. I was the most apprehensive about going through with this than I had every been. “Okay” I said to myself  “this is going to be the third time others have seen your makeup, nothing to be worried about, you didn’t come here to win you came here to show off your art”. Just as I began to calm myself down the doors opened and people came flooding in. Now it was just the insecurities of me only having my mom there to support me, I really didn’t expect any of my family to come. So off we go one by one we walk up on the stage as dead as we can be doing the opening number and for some reason as soon as we started all my nerves went away. This was not about me or my makeup, now this was about the show we were putting on, making sure I didn’t miss my cue and maintaining my dead persona. Even when were were changing for the next category it was like I was on autopilot going through the motions without even thinking about it.

After the evening gown portion we took a small intermission to get the winning results. The winner was determined not by a panel of judges but by the audience. You would place a card in the contestants box then they would tally the votes, the more people you brought the higher of a chance that you would win. I honestly did not care on my placement, how far I pushed myself out of my comfort zone and looking back having an amazing time and a story to tell, as cliche as it is, I was the winner in my book. The votes were in, they had people in  S.W.A.T team costumes to “control the zombies” we all lined up on stage when they called the two finalist. The girl who was being followed around by MTV got runner up and the women whos husband does professional makeup was the winner. I was so happy that I actually went through with this. After the show was over they wanted to interview everyone again. I unfortunately had to leave early so I wasn’t able to get a full interview in but I was approached by the coordinator of the show. He pulled me aside and told me that because of my age they were not able to award me with my actual placement of runner up. (the prize for the winners was to travel to a convention and get the word out on the pageant, you needed to be 18 or older to go). In that moment I was the most proud of myself that I have ever been. Being publicly placed at third to find out I actually got second place to a women who had gotten her makeup done professionally, beating the other girl who had also gotten professional help and only having my mom there to vote and support me. I was in complete and total awe, I was completely speechless. Constantly wanting to give up because I didn’t think I was good enough based on my experience, skill and age and not letting my fears and insecurities to drag me down. I feel that I accomplished a lot and I know for a fact that it was a major stepping stone for who I am now and what I can accomplish in the future.