Who is La Malinche?

La Malinche, also known as  Malintzin, Malinali, or Doña Marina, was a Native American woman. She was born in the late 1400s. Her birth name was Malinali and was born into a noble family in the province of Paynala, at Coatzacoalcos, Veracruz. La Malinche’s father died when she was very young. Her mother married a younger man and had his son thus, she was a stepdaughter. Even if she was the oldest, the inheritance was to go to the boy instead of her. 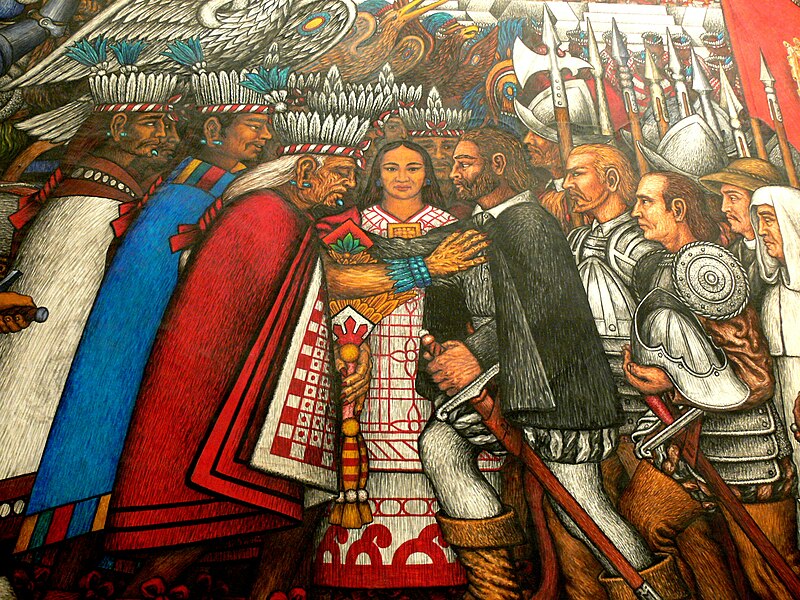 According to the article, Malintzin/La Malinche/Doña Marina: re- reading the myth of the treacherous translator, Marina was given away from her mother to a group of Indians from Xicalango. The group of Xilcalango Indians gave her away to the cacique, “leader”, of the village of Tabasco. The cacique of Tabasco offered Cortés food, gold, stones, and twenty women, including La Malinche, in exchange for their “cooperation” with the conquistadors (63). Hernan Cortés was a Spanish conquistador who led the expedition that resulted the fall of the Aztec Empire.  La Malinche was able to speak two languages; Nahuatl and Mayan. Nahuatl was the language she spoke in her hometown. When she became property of the cacique of Tabasco, she learned how to speak Mayan.

According to the article, The Cholula Massacre, by Christopher Minster,Ph.D., La Malinche became friends with a wife of a high- ranking Cholulan soldier and she warned her  to leave before they attack the Spanish. The woman suggested La Malinche to marry her son after they destroy the Spanish. La Malinche agreed and fled with her to buy time. La Malinche turned her in to Cortés and interrogated her. Cortés was then ready to take action. He gathered all the noblemen of the city of Cholula in a courtyard of the city. In his speech, which was translated by La Malinche, he accused them of treachery. Hernan Cortés ordered his army to attack the unarmed Cholulans. Outside the city of Cholula, the Tlaxcala Indians, (Cortés’ allies) also attacked. Thousands of Cholulans were killed.  According to Christopher Minster, Ph.D., “many modern Mexicans see Malinche as a great traitor who betrayed her native cultures to the bloodthirsty Spanish invaders.”

According to the article, Biography of Malinali, after conquering the empire of Tenochtitlan, Cortés needed La Malinche more than ever. They developed a relationship and she gave birth to his illegitimate son. Cortés named him Martin, after his father. He was known as one of the first mixed, native and European, child to be born. She lived in a house built by

Hernan Cortés in the town, Coyoacán. La Malinche and Cortés went on an expedition in Honduras. They left Martin with Cortés’ cousin, Juan Altamirano. After Cortés’ wife came to Mexico from Spain, Cortés encouraged La Malinche to marry one of his Spanish captains named Juan Jaramillo. She never lived with her son and Cortés wanted their son to stay with Altamirano since that was the only home Martin knew. Cortés later took Martin to live with him in Spain. Their son, Martin, was later legitimized by the Pope Clement VII.

Cortés was also referred to “Malinche” by the Indians. It meant, “the captain of marina” (27). She always accompanied him to all the meetings with ambassadors and chiefs, they were both called “Malinche.”

In the article, After 500 years, Cortes’s girlfriend is not forgiven, by Clifford Krauss, Krauss says that if the government made the house into a museum it would be insulting. Rina Lazo, a muralist who lives at La Malinche’s residence, said, “For Mexico to make this house a museum would be like the people of Hiroshima creating a monument for the man who dropped the atomic bomb.” In 1982, a statue of La Malinche, Hernan Cortés, and their son, was placed in the plaza of Coyoacán. It was built as a tribute to mixed Native and Spanish descendants. Many people were upset and began to protest to have it taken down. the protesters won, and they had the statue moved to the national park of Xicoténcatl. The park is small and hard to find. It was placed there, for it to be forgotten.