Dementia is characterized by progressive global deterioration of cognitive abilities in multiple domains, including memory, and at least 1 additional area—learning, orientation, language, comprehension, and judgment—severe enough to interfere with daily life (Daviglus 176) .Different forms of dementia, including vascular disorders (multiple strokes), dementia with Lewy bodies, Parkinson’s dementia, and normal pressure hydrocephalus would be grouped among the non-Alzheimer disorders (Dementia). Alzheimer disease is the most common cause of dementia it accounts for 60% to 80% of all dementia cases, and as many as 5.1 million Americans may currently have the disease; the prevalence of mild cognitive impairment is even higher (Daviglus 176). Furthermore, the number of persons affected by Alzheimer disease or mild cognitive impairment is expected to increase considerably with the aging of the baby-boom generation (Daviglus 176). About 5 percent to 8 percent of all people over the age of 65 have some form of dementia, and this number doubles every five years above that age (Dementia). It is estimated that as many as half of people 85 or older suffer from dementia (Dementia). Although dementia has always been common, it has become even more common among the elderly in recent history. It is not clear if this increased frequency of dementia reflects a greater awareness of the symptoms or if people simply are living longer and thus are more likely to develop dementia in their older age

The cognitive or behavioral impairment involves a minimum of two of the following domains:

A large randomized trial of cognitive training (consisting of memory, reasoning, and speed) over 5 to 6 weeks with a subsequent booster period showed modest benefits on cognitive functioning and a small, statistically significant effect on reducing the extent of age-related cognitive decline at 5-year follow-up (Daviglus., et al 180). This trial also showed a very small significant benefit on instrumental activities of daily living—for example, managing finances, managing medications, and keeping house—and, in a subgroup analysis, benefit on driving performance in elderly persons (Daviglus., et al 180). However, these findings need to be replicated to confirm the benefits of cognitive engagement on preventing cognitive decline over a longer period and in persons with varying levels of baseline cognitive abilities before firm recommendations can be made (Daviglus., et al 180). Currently, no evidence of even moderate scientific quality exists to support the association of any modifiable factor (such as nutritional supplements, herbal preparations, dietary factors, prescription or nonprescription drugs, social or economic factors, medical conditions, toxins, or environmental exposures) with reduced risk for Alzheimer disease. Numerous modifiable factors have been reported to show association with risk for Alzheimer disease across multiple studies, but the overall scientific quality of the evidence is low.
I interviewed Nancy Hepburn who had a grandmother with dementia and is currently taking care of her mother who also had dementia. “The hardest thing to go through is them not remembering who I am and the times we had together” (Hepburn). My grandmother started having abnormal behavior and accused me of stealing her perfume, but I later found out she was hiding them (Hepburn). Nancy Hepburn also says, “My mother still remembers who I am but has short term memory loss, I have noticed while taking care of her, one thing that gets me frustrated and is also a very hard thing to do is have a conversation with her”. “We will start talking about a topic and then she will ask me the same thing that she did seconds before, or she gets it all mixed up and loses the point of what we were talking about” (Hepburn). You need to have a lot of patience and understanding for their circumstances and no matter how bad it gets, it’s your family member and you have to understand they weren’t like that before the disease (Hepburn).

As the disease progresses, these activities can enhance the person’s sense of dignity and self-esteem by giving more purpose and meaning to his or her life. Activities also structure time. They can make the best of a person’s abilities and facilitate relaxation. Being active can also provide a sense of engagement, usefulness and accomplishment, which can help reduce behavior like wandering or agitation. Both a person with 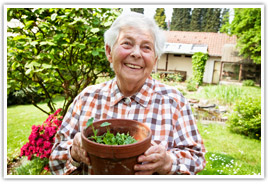 dementia and his or her caregiver can enjoy the sense of security and togetherness that activities provide. Consider the person’s likes and dislikes, strengths and abilities, and interests. As the disease progresses, be ready to make adjustments (Alzheimer’s Associations 2).

Daily routines may include:

Other activities may include:

Alzheimer’s Associations. “Activities at Home Planning the Day for a Person with MIDDLE- OR LATE-STAGE DEMENTIA Middle- or Late- Stage Dementia” (2017) 1-12

This article explains daily activities to plan with a dementia patient. I believe this source is credible because it is written by the Alzheimer’s Association. I will use this information in my research to find different activities that will better help the dementia patient along with the caregivers.

This article researched the reduction of risk factors for Alzheimer’s disease. I find this article credible because state-of-the-science statements were prepared by independent panels of health professionals and public representatives by the National Institutes of Health (NIH). I will use this source in my report to better understand the risk factors and preventions of Alzheimer’s Disease.

This source is credible because it is information from a clinic. I will use the information in the article to better understand dementia and what its symptoms are.

This source is credible because she has a mother and had a grandmother who both have and had dementia. I will use this information to better understand what it is like taking care of an Alzheimer’s patient.

This article explains the different behavioral impartments on Alzheimer’s disease. I believe this to be a credible source because it is information from the National Institute on Aging-Alzheimer’s Association. I will use this source to the impairments that dementia causes.