Jackie Robinson, the first Black man to play in the MLB was such a big part of American History. He highly influenced so many people especially white people (who were extremely racist at the time). As a kid Jackie and his family were constantly getting treated terribly because of his race and he certainly learned how to deal with the criticism, and it only made him stronger and it prepared him later on in life with his career. Jackie united America through the use of sports, which America found tremendously inspiring. Playing sports consisted of teamwork, being united, helping and encouraging each other to do our best, so when everyone started to notice how Jackie Robinson was there for his team even after all the hardships they put him through, they respected him as well as other people of color so much more and made a huge impact on the cruel racist society.

Jackie Robinson was born in Georgia the year of 1919. When his father left him and his family at only 6 months old, his mother was forced to move to Pasadena, California in a white based neighborhood(Maury). They grew up in poverty and in a place where society was very ruthless towards African Americans. Jackie Robinson’s mother worked various jobs as a single parent in order to support herself and her children. While living in a white neighborhood Robinson’s mother encountered a series of events with people who were extremely racist towards her and her family. Growing up as a child Jackie Robinson was highly influenced by his mother , because of the way she carried herself when dealing with racial discrimination. Robinson’s mother was a very strong and independent women even through all the obstacles she has ran into because of racism. As a teen, Jackie Robinson was involved in several sports at a varsity level and was the first athlete at UCLA to earn varsity letters in all of four sports he played in college(Maury). Although he was extremely talented at many of these sports he was discouraged by the fact that so many African Americans that he knew with a college degree weren’t able to find a job due to the extreme racial society. Unmotivated by the fact that he came to believe that due to racism he was not going to be able to succeed in school and he dropped out of college and decided to find another job to help his family financially. Between all this, Jackie was playing baseball on the side, he didn’t take it serious it was more of something he was doing for fun, little did he know that he was going to be playing with an All white MLB team. 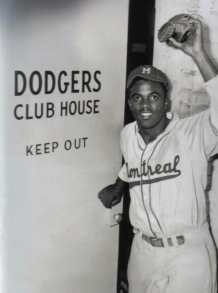 Before Jackie Robinson had entered the MLB, he was playing for an baseball league that was specifically for African Americans called a negro league team where, “Branch Rickey, [who was the president of the Brooklyn dodgers], sent out scouts to look for a perfect candidate to draft into the MLB” (Gates). Although there were better players in the negro league, the scouts had their eyes on Jackie Robinson because of the way he carried himself during the games, he gave this impression of being unbothered by what other people had to say about him because he was very self motivated which was exactly what they needed. Eventually Rickey had Offered Jackie Robinson a chance to play in the MLB with an all white team. “In October 1945, the Brooklyn Dodgers had announced that Jackie Robinson was officially signed to their team”(Gates). It’s insane to even think about a black man playing in the all white MLB Team, all this happening right after WW2 and just a decade before Martin Luther King, Jackie Robinson was up for making history. In order to prepare Jackie Robinson for the MLB Rickey sent Robinson to play for a minor league team, the Montreal Royals. Jackie’s first game with the Royals was played in April 1946, throughout his first game many people shouted out racial things but Jackie did not let it get to him(Nack). “The Royals won their first game with Robinson, Robinson making 4 hits and 1 home run”(Nack). Robinson had started his baseball career great and because he had such a successful season he got promoted to officially start playing for the Brooklyn Dodgers. During the process of drafting Jackie Robinson, Rickey knew it was going to be a difficult journey for Robinson, but Rickey knew that Robinson would be able to handle the struggle of the racial discrimination, because the first impression he had got when scouts seen him playing for a negro league. Rickey had seen extreme braveness in Robinson when he took the offer to play in the all white MLB team, because during this time frame racial discrimination was highly intense for every African American. That following year in April 1947, Jackie Robinson finally made it on the major league team with the Brooklyn Dodgers, breaking the color barrier (www.biography.com/people/Jackie-Robinson-9460813). It opened so many peoples eyes of all ethnicities, many white people even started to join civil rights movement because of it. Throughout Robinson’s first season was the most intensified, it had gotten so awful that Robinson would get kicked out of stadiums during his own baseball games. Traveling as a team was even worse, the entire team was not welcomed to certain places only because they had a teammate African American on the team (Gates). During games Robinson would get harassed and yelled at, he found himself having a hard time coping with the harsh racial comments and discrimination. People didn’t care at all for anyone who was African American and it was a very stressful situation for Jackie Robinson to be the only African American on an all white baseball team, but he pushed through it and showed everyone all the good things that can happen when uniting together not only in sports but in many other aspects in life for the future. 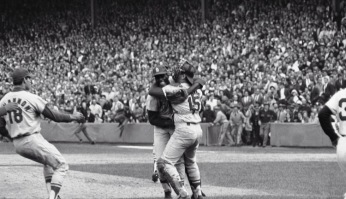 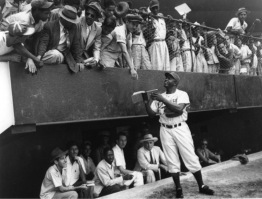 Jackie Robinson made a huge impact for all athletes and for America which was extremely segregated at the time. Jackie Robinson’s being the first black man in an all white MLB team was one of the most challenging things that could ever happen at that time. There were so many people in this country who did not want African Americans to even be near them, sadly, society was so brutal towards African Americans. Robinson dealt with racism throughout his whole life, as a kid, and as an adult. Dealing with furious Dodger fans, uncooperative teammates and many white people who had so much control over African Americans at the time and who were against his race. Jackie Robinson opened many peoples eyes and changed their views on other ethnicities, which had brought everyone closer together even through all the unpleasant reactions of others who weren’t as opened minded as others about an African American teaming up with white men.  Jackie stood his ground and when people would try to put him down and discriminate him, this influenced many African Americans as well to stay strong and not let anyone treat them less than their worth, Jackie brought so much hope and enlightenment to the America that was dreadfully segregated. Jackie made it look very easy for him to brush off all the disrespectful comments and actions towards him and about his ethnicity which inspired many other African Americans to continue to fight for their rights. He had such an amazing effect on everyone at the time, it brought so many people together throughout the country, because of the fact that white men and a black man were coming together to team up as one. As seasons went by Jackie Robinson became so influential he had got innumerable people to follow in his steps of becoming united in this country no matter what ethnicity you might be. Jackie was such a strong person to even deal with a situation like this at the time, Jackie knew what he was getting himself into and he still decided to push through it and showed everyone the importance of being together especially through hard times of segregation. As he got more into his career as a professional MLB player he got more and more people to join the civil rights movement and they learned that treating people so crucial because of a skin color or race was very immoral. Slowly but surely Jackie was definitely showing people a different mindset than they were used to and many people looked up to him because of the strong and respectful choices he made for himself and for other African Americans who were fighting for their rights, this impact was so significant that even today many people ares still inspired by all his hard work he did and how he was able to make a big difference for America at the time and how it has affected America.