In America today, we face many problems such as Police Brutality. Police brutality is one of several forms of police misconduct which involves undue violence by police members. Although illegal, it can be performed under the color of law. Police are to be trained to protect and serve for all the days of their life, instead they are using the term “they were afraid for their life” and had to take another life. In many of these cases officer are killing unarmed African Americans, but why, we may never know. Do we say that officers are doing their job, or is there a clear target for who the officers are going after? As an African American in today society instead of calling for police, WE are who are afraid of the police and for our life.

I do not believe that officers are just doing their job, there has been too many cases so similar ending in an unarmed death of an African Americans. There must be better training, there must be background checks, they should undergo more stressful scenarios to be able to handle high pressure situations. They should shoot blanks or aim for their legs not to take their life. African Americans are humans too like any other race just the color of the skin is different. That does not automatically make them dangerous or criminals. There are too many ways to prevent police brutality that it is frustrating that it is not being done. It all starts with the police. If officers are not being held accountable it will continue to happen.

So, would you say that the Police Officers all around America are targeting African Americans more than any other race? I definitely am. I have witnessed firsthand officers doing that, and so has the rest of the world. It’s called DWB

(driving while black) and it is a real thing. My brother was pulled over for that same reason, and the officer told him what are you doing in this area doesn’t look like you belong. Since when was that appropriate, and how is that considered protocol.  My brother was parked in front of our house and was targeted for not looking like he fit in the area. Things escalated quickly and luckily for my brother he was not shot, instead he was choked out and arrested for resisting arrest.  He had no warrant, no record and he was not doing any reckless driving. As he was detained in the police car, police cars continued to show up in total there was nine cars. For what? The officer claims it was for crowd control, but there was no crowd outside, just a black man in the back of a police car with no weapon and treated as an armed criminal. Of course, the officer was considered doing his job, and my brother was the one in the wrong and ended up being fined for taking it to court. He lost the case of course, and is now on three years’ probation. He did no wrong and was treated as a murderer.

Here are some cases involving police brutality and innocent African Americans lives being taken. “St. Louis police officer Jason Stockley shot and killed Smith in December 2011, after Stockley and his partner, Brian Bianchi, witnessed a suspected drug transaction and Smith allegedly fled the scene. After the police chase ended, Stockley exited the SUV with his department-issued handgun and a personal AK-47 pistol, a violation of department policy, according to a criminal complaint. Stockley fired five times into Smith’s vehicle. Stockley was acquitted after St. Louis Circuit Judge Timothy Wilson said the state failed to prove that Stockley did not act in self-defense.” (Park 1) 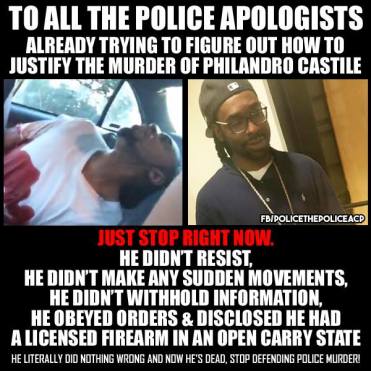 “Philando Castile 32-year-old Minnesota man was fatally shot during a traffic stop by police officer, Jeronimo Yanez, in July 2016. Jury found Yanez not guilty.” (Park 1) “Terence Crutcher a 40-year-old man was shot in September 2016 by Tulsa Police Officer Betty Shelby after Crutcher’s SUV was found stalled in the middle of the street. Shelby testified that she opened fire because she feared for her life. Videos of the shooting showed Crutcher walking on the road with his arms in the air before being shot.” (Park 1) “The 43-year-old Samuel DuBose who was pulled over for a missing front license plate was shot in the head in a July 2015 incident captured on body-camera video. The officer, Ray Tensing, was charged with murder and voluntary manslaughter. Tensing testified that he was being dragged by the left arm when he reached up and shot DuBose, while prosecutors said he wasn’t being pulled by the car and didn’t need to fire at DuBose. A mistrial was declared in 2016. A second mistrial was declared in 2017 after juries deadlocked over a verdict.” (Park 1). In all these cases none of the victims were holding a weapon, none appeared to be dangerous yet all of them lost their life based on the color of their skin. 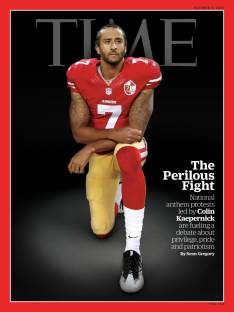 “Riots occur because these police killings just keep happening, no matter how many peaceful marches happen. It is, in every sense, maddening.” (Joseph). Many famous people are using their platform to try and bring light to the situation. Beyoncé Knowles singer, actor paid tribute to Black Lives Matter in her halftime Super Bowl performance in 2017 to show she will stand up against police brutality. Colin Kaepernick former quarterback of 49ers started kneeling during the national anthem. When asked why, he told the press: “I am not going to stand up to show pride in a flag for a country that oppresses black people and people of color.” (Smith). Kaepernick will not stand for the national anthem until he sees justice for his people and police brutality to end. These celebrities and many more have made a stand to stand by the people to hope to help end police brutality. They are trying to let the world know police brutality is real and racism is still happening and there has to be a way to make ends meet and let justice be served worldwide.

While the officers are here to protect and serve, they created a Blue Lives Matter. Blue Lives Matter is a counter movement in the United States advocating that those who are prosecuted and convicted of killing law enforcement officers should be sentenced under hate crime statutes. It was founded on December 20, 2014. “Blue Lives Matter, a pro-police movement formed in 2014 as a reaction to Black Lives Matter following the Ferguson protests, aims to “contradict the anti-police philosophy and hatred that Black Lives Matter pushes out,” spokesperson and retired Las Vegas police lieutenant Randy Sutton told Rewire News (Corcione).

Some would say that officers are just doing their job.  The duties of a police officer, also known as a law enforcement officer, focus on protecting people and property. They patrol the areas they are assigned, which sometimes include entire jurisdictions, respond to calls, enforce laws, make arrests, issue citations, and occasionally testify in court cases. Patrol officers are taught six ways to reduce and manage biases. As part of the curriculum, there is also a test that has officers ask themselves: “Would I be requesting consent to search, but for the fact that this person is black? That this is a teenager?” Dr. Fridell explained. “You picture the person with a different demographic, and would I still be asking this way?” (Baker).

Another exercise encourages officers to recognize biased behavior in others and to be on guard for profiling by proxy. Greg Meyer, a retired Los Angeles Police Department captain, responds to a Los Angeles Times editorial by stating, “Since January 2015, there have been about 170 American peace officers killed in the line of duty by gunfire. This happens when the officers do not recognize and react to the deadly threat soon enough. We would all be better off if people did not run, resist or attack officers who are doing their jobs, or hold shiny objects in their hands that they suddenly pull out when resisting arrest.” (Thornton 1). It may seem that Meyer is okay with the police killing unarmed victims because they did not follow proper procedure while being pulled over or arrested. Mike Post former chief of police talks about officers in the heat of the moment. He states, “Hindsight is a great thing, but what gets left out of the discussion is how often a police department might be sued if it had done nothing to intervene and, say, some knife-wielder went on to stab someone. This is not a conservative-versus-liberal debate, just one of common sense about well-intentioned cops who are presented with only bad options to pick in the heat of the moment. What’s alarming is the number of people who feel they have more insight than the men and women on the street who risk their lives daily” (Thornton 1). He suggests that at the heat of the moment they only have bad choices to make and if they don’t make those bad choices they could face being sued. One case where they have been sued is when an officer on duty at a high school refused to go into the school while he knew there was a shooter on campus. Meadow Pollack was a senior who attended the high school who died during the shooting, her father Andrew Pollack is not only suing for a wrongful death lawsuit against the shooter but the security officer as well. “I’m not interested in any money,” Pollack told the Sun Sentinel “I just want to expose what a coward [Peterson] was and that he could’ve saved everybody on the third floor. I don’t want him to go anywhere in the country and not have people recognize what a coward he is.” (Flynn).

I am African American, and I fear for my life as a Black person that even though I have no warrants, no tickets, nothing wrong with my background,

but if I get pulled over, I may have a horrible officer who can just take my life and get away with it. Not all officers are like this, but we need to end this police brutality. We need equality throughout the world. We as a nation must find the best way to get our police properly trained so they can aide all ethnicity. We must have a system where black people or people of color are not targeted because of their skin. Imagine being a mother you don’t want to raise your child and tell them because of your skin you must watch your every move even with the people who are here to protect you. All lives matter, and we shouldn’t have to protest to get that point across.