I grew up in Southern California and describe it as a “everything bagel state,” it has different colors of people, different beliefs, and different sexual orientations, we have a little bit of everything. It was easy for me to except that we were all different, this is all I 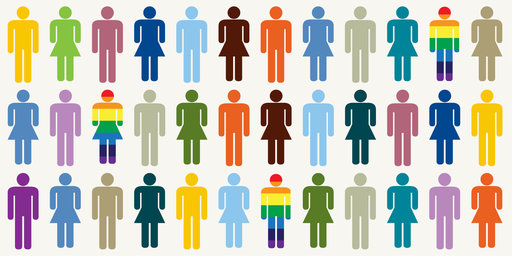 knew. At a Young age, around 6 or 7 I learned that sometimes guys like other guys and girls like other girls, “gay” and “lesbian”. This was something I didn’t put too much thought into, I just thought everyone likes what they like and that’s just how the world goes. Obviously, as I got older, I learned that some people don’t accept it as easily as I do.

When I was about 20 years old, I received a phone call from my very close cousin whom I grew up with and was like a brother to be me. He told me “I love you, I wanted to tell you that I’m gay and I have a boyfriend. I don’t want you to think any different about me, I’m still your same cousin.” He started crying. I did not want him to feel bad, ashamed or embarrassed about being gay, that was who he was. So, right after, I said, “I had a feeling that you were! And I love you no matter what! He wasn’t that surprised that I knew, we are very close. He kept crying and said he told his Mom and his step-dad, and they were taking it really hard. His mom was sad about it and his step-dad thought it’s horrible that he likes guys and is something that he is not going to accept. Along with that, some of his best friends that he grew up with were shocked and had deleted him on social media and stopped talking to him. I could tell by his voice that It was killing him to have this kind of reaction from people that he was close to and loved. I told him that he was a great person and if his friends don’t want to be friends with him than its their loss, this is who you are, if they stop talking to you because of this, they are not your true friends. Your mom and dad, on the other hand will hopefully get it, they probably just need time to process everything. I wanted to do everything in my power to let him know that there was nothing wrong with him or his feelings, and that he had someone to be there and accept him for him.

That weekend I visited my cousin to show support, to let him be open about being gay and not have to hide it anymore while being around someone, especially family. I couldn’t imagine having to hide who you are from your loved ones, or really anyone. So it was a big deal that I made him comfortable in his own skin. We talked for hours about when he first started noticing he liked guys, his first “real” crush. I asked him about his boyfriend, and asked him if he was cute, we both laughed. I asked him normal questions that anyone would ask someone about a boyfriend or girlfriend. I told him I would love to be the first to meet him. I could tell that made him happy. Soon after, I met his boyfriend who was extremely nice, and I noticed right off the bat that he was perfect for my cousin.

Around that time there was a family event, but my cousin couldn’t make it. I saw my Aunt (his mom), and she said “I’m sure you heard about your cousin” in a disappointed way. The way she said it honestly bugged the CRAP out of me. So with a huge smile on my face I said, “Yes! I did, and I met his boyfriend, he was so nice, they’re such a cute couple.” She had a slightly shocked look on her face because she had no idea that I had met him, or what I would think about it all. I wanted her to know that there was someone who thinks that there is absolutely nothing wrong with it and maybe it would sort of change her outlook. She told me about the hard time that she was having with it, I told her I understand, that was her little boy, but he seems really happy. And that was all I was really going to say about it. It wasn’t my place to try to convince her. His step-dad overheard us talking and said “I just I don’t want to see it around me.” There was really nothing I could say, that was how he felt and like I said, it wasn’t really my place.

Time moved forward, about a year, mostly everyone accepted the fact he was gay including  his step-dad. See, his step-dad was black, and his mom was white. He told my cousin that there was a time where people didn’t accept them being together, and he didn’t want to do the same to him. His mom  became very close to his boyfriend. They both came to Christmas parties and other family events, and it became normal to everyone else, which made my cousin finally feel comfortable.

A wedding ,on a beach, with our significant others, on a beautiful

sunny afternoon, , with an amazing  bright red sunset sounds like a dream wedding to a lot of us.. This wedding was my cousins, he was as happy as could be. Our whole family sitting there watching was the greatest thing that he could’ve asked for. The reception was at a campground where everyone had their tents, we barbecued, played games, it was a “them” kind of ceremony. That night we briefly separated from the party and sat on the cliffs, watching the moon reflect off of the ocean. He thanked me for being there for him from the start, and that, that’s what he needed, was someone to be there for him. I told him I loved him I am happy that he is happy.

Everyone is different, this whole world is and Everything Bagel, there are people going through different experiences then we are, that are trying to accept themselves and having other people accept them. Some of the time you see others putting people down, judging them and making them feel bad. I’ve learned that being there for someone while they are going through a difficult time, just might be the best thing you could do for someone, because it is totally okay to be different.