Growing up especially in my pre-teen years I was so confused with how I was supposed to act. I was so tomboy, I loved getting dirty and playing sports, I hated the color pink and never ever wanted a boy to beat me at anything. In middle school, I fell in love with basketball and took it very seriously. I played every day at lunch with all of my guy friends. As I got older and the more my friends and I started to hit puberty, things started to get a little weird. It wasn’t common for a 13/14-year-old girl to be playing basketball with a bunch of sweaty teenage boys. Girls my age were supposed to start playing with makeup and trying to get boyfriends. As time went on the less and less I played basketball, with boys anyway. In a way, I felt like me playing basketball and not being girly gave off this vibe which caused people to question my sexual orientation. I for one didn’t really enjoy that too much because I was young and I didn’t want anybody thinking I was gay. Although as more time passed I questioned if I actually did like girls and it turns out I do. But the moral of the story is, is it okay to question the sexual orientation of a girl/woman in a predominately male sport? Or does it even matter? 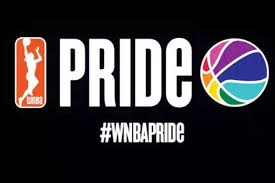 Candice Dana Wiggins is an American retired professional basketball player. Wiggins played college basketball at Stanford University, where she graduated as the all-time leading scorer in Stanford and Pac 10 women’s basketball history. Throughout her playing career, Wiggins played for the Minnesota Lynx, Tulsa Shock, Los Angeles Sparks and New York Liberty of the Women’s National Basketball Association (WNBA) and has played overseas in Spain and Greece. Wiggins has also won a WNBA championship and WNBA Sixth Woman of the Year.

Candice Wiggins caused a storm by claiming she was bullied in a league that was ‘98% gay’ but in truth, the WNBA is open, tolerant, and committed to inclusion. Candice Wiggins’ decision to go public with accusations that she’d been bullied in the WNBA, partly because she is heterosexual, was guaranteed to create a firestorm.

Since Wiggins said that “98% of the women in the WNBA are gay women” and “people were deliberately trying to hurt me all of the time. I had never been called the B-word so many times in my life,” she hit the sweet spot for media coverage of the WNBA.

The league is seldom considered newsworthy enough when we see things like the creation of a superteam in Washington, with Elena Delle Donne and the Mystics, or when an epic WNBA final between the Minnesota Lynx and Los Angeles Sparks goes down to the final seconds of an elimination game.

But a player asserting all the most vicious stereotypes about the league? That’s when the big outlets cannot wait to step up. Many believe the timing of Wiggins’ claims are no coincidence, given that she was working on a book about her WNBA career.

Perhaps more worrying than Wiggins’ remarks was that the league did little to push back against her claims. The WNBA did not respond to the Guardian’s request for comment on this story until a statement attributed to league president Lisa Borders.

The statement read, “When I first read the comments I was stunned and disappointed. In my time with the league and as a fan before that, I’ve had the pleasure of getting to know a group of highly competitive women who are driven to succeed at the highest level on the court and constantly striving to help create an opportunity for all members of their communities.

“I’ve found our players to be earnest, heartfelt and eloquent, and clear in their commitment to our league’s core values of diversity, inclusion, and respect. Of course, it concerns me if any of our players do not have a positive experience and I hope that anyone who feels uncomfortable would reach out to me or others in the league office.”

Beyond how incomprehensible that is to the players, why wouldn’t the league support its players when the facts are far friendlier to the league’s position than they are to Wiggins? it has ensured that in a rare moment in which the WNBA is in the spotlight, it is being defined by false information about the players and their accomplishments. But in the absence of guidance from the league, a funny thing happened. The diverse, opinionated and intellectually impressive WNBA players represented themselves and destroyed much of the ignorant stereotyping by Wiggins’ alternative facts.

Devereaux Peters of the Indiana Fever made quick work of Wiggins’ math. WNBA legend and new Hall of Fame nominee Rebecca Lobo got at the issue with the 98% comment as it played in the media, referencing this ESPN piece that pointed out that “there is no published data on the number of gay players in the league.” As an 11-year veteran, Monique Currie put it, “Wiggins needs to check her privilege at the door, and not group her very unfortunate personal experiences on an entire group of women.” Many others followed. But what Wiggins has done is provide implicit permission for anyone else to categorize WNBA players by their sexuality. It also takes a percentage of media oxygen for a league that drew more than 1.6 million fans to its games last year, saw television ratings jump 11% and attendance by 4.6% during a year with the best overall play and playoffs anybody can remember and redirect it off the court.

Worse yet, it is a built-in excuse not to cover the league for anyone in media who are looking for one. Even a former player said nobody watches, right? And to those not paying attention, the Wiggins story is one of the few that broke through, garnering ESPN alert status on phones and landing prime real estate in Bleacher Report, among many other places. All contained within a falsehood, selling out a fanbase Wiggins herself claimed was what kept her going for years as a player.

Imani Boyette of the Chicago Sky explained this eloquently in response to Wiggins, “You said, ‘Nobody cares about the WNBA. Viewership is minimal. Ticket sales are very low. They give away tickets and people don’t come to the game.’ And that’s simply not true. When you retired in March, you said the reason you stuck around so long and kept fighting through injury was because of the fans. Did you know our ticket sales and viewership increased this year? Did you care to know?

“Your article hurt me, Candice, both as your fellow WNBA player and as a little girl who looked up to you. You chose to typecast an entire league instead of speaking your peace, telling your truth. You chose to put all of us down, fans included. How can you turn your back on an entity that gave you your career, your upcoming book, and your worldwide acclaim? I think that’s selfish.” This touched me a lot because I felt the exact same way as Imani Boyette, it blows my mind how quick she could be to talk bad on the entire WNBA. Wiggins didn’t even have the courage to defend her larger assertions about the league when contacted by Mechelle Voepel of ESPNW, one of the reporters versed in the league and then able to question her effectively. Wiggins ended up telling Voepel she merely wanted “privacy and peace”, a day after making statements that guaranteed less of both for the players who have followed her in the league.

Wiggins used her platform to denigrate the league, its current and former players, while opening up a sinister new line of attack on a league that, in conversations with players from every era, embraces every woman, regardless of background or sexual orientation, who can shoot or rebound or dish or protect the rim. No one has come forward to corroborate Wiggins’ claims. And that doesn’t invalidate Wiggins’ own experience. But it certainly casts doubts on the broad conclusions she made about the league as a whole. And if Wiggins merely did this to try and gin up interest in her book … well, she’ll likely find that she miscalculated. Those who support the league and its players aren’t interested in false accusations. And the people she emboldened with her statements, utterly unsupported by the facts or collective experience of others in the league? They aren’t interested in supporting women at all.