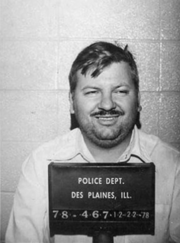 John Wayne Gacy. Perhaps the most unsuspected killer of the 1970’s. A reliable building contractor, and a clown who made kids happy, but a serial murderer underneath it all. A man who involved himself in his community. Did he do it to become unsuspected of his horrific crimes or was his childhood the reason behind his vicious rage? A model citizen turned into a terrifying killer. What led him to become a monster that most people remember and even admire today?

Beginning with John Wayne Gacy’s childhood, it is shown that he experienced a few traumatic incidents that helped form the monster he was. Born in Chicago, Illinois in 1942, Gacy was raised in an Irish Catholic family that lived in a working middle-class neighborhood. His childhood seemed usually normal. His father, John Wayne Gacy Sr. was an alcoholic who regularly assaulted his wife and verbally abused his children. John Wayne Gacy Jr. loved his father unconditionally and was always searching for his love and acceptance even though his father would physically abuse him. His father constantly blamed him for every incident he experienced as a child and was seen as a failure. John Gacy Jr. never knew what real love was. As a child, growing up it is important to receive the love and affection from your parents to feel accepted. In an article written by Rebecca Taylor LaBrode, she states, “Other historical factors common in serial killers are abuse, trauma, insecure attachment, loss or abandonment of a parent or caretaker, antisocial behavior, head injury, and low arousal levels” (155). Because Gacy Jr. constantly saught his father’s approval or acceptance and never received it, it caused him to develop a deep regret in his life. Gacy was very close to his mother and two sisters but desperately wanted his father’s attention and maybe because he was the only son in the family. He lived his life trying so hard to gain his father’s respect.

During Gacy’s childhood, he faced many incidents that may have been a cause as to why he became a murderer. When he was 7, him and another boy were accused of molesting a young girl and his father beat him with a razor strap for it. Gacy was also molested by a family friend which he suffered in silence and never told anybody about the incident because he did not want his father to blame him or beat him for it. When a young child experiences something as traumatic as this and never talks about it, it affects you emotionally and mentally. This is why Gacy had emotional problems and grew up to be an angry, bitter man. There was one story where Gacy moved to Las Vegas and got a job as a mortuary assistant. In an interview during his later years, he recalls sleeping behind an embalming room and climbing into a coffin of a teenage male and spending time laying next to him until he became disgusted and climbed out. This particular incident can explain why Gacy became infatuated with murdering young men and boys. He was a homosexual but often attacked and victimized these boys because he didn’t know how to deal with his own sexuality. “Worthless little queers and punks- John Wayne Gacy’s depiction of his victims” (LaBrode 155). John Wayne Gacy did not want to admit he was a homosexual because he would think about the disappointment his father would feel.

As Gacy grew older, he became more successful. He became involved in his community that many people considered him to be a role model citizen. He was even an assistant precinct captain for his local democratic party. Gacy Jr. hoped that this would help gain some acceptance from his father but instead his father insulted him and called him a patsy. Gacy came back to Illinois and went to business school which he graduated from in 1963. He married his first wife, Marylynn Myers, who’s father purchased three Kentucky Fried Chicken restaurants that Gacy would become manager for. Around the same time, Gacy joined the Jaycees, an organization that taught leadership and offered civic opportunities for their members. He became vice president very quickly and gained a lot more respect from his neighborhood and the people who knew him. But this organization had a dark side as well. They often involved themseleves in prostitution, wife swapping, and even drugs which Gacy became heavily involved in. Gacy went as far as to develop a club in his basement where he would invite young boys to have fun and indulge in drugs and alcohol. This was the beginning of his vicious rampage that would later shock his entire community.

John Wayne Gacy was living the normal life until he had his first offense with one of the members of the organizations 15 year old son. Gacy had given him alcohol and forced the boy to perform oral sex. The boy eventually reported the incident to his father and took criminal action against Gacy. Gacy was arrested for sexual assault against the boy and many others at the time. Before he was sentenced to 10 years in prison for sodomy, he hired an employee to attack the victim’s father and scare him out of testifying. But the father had escaped and eventually testified against Gacy and he was sent to prison. Even in prison Gacy was a model prisoner and became head cook and even took projects that helped enhance the lives of the prisoners. Gacy was released on parole after only serving 18 months of his 10 year sentence. He finally had a new lease on life. After his release from prison, he bought a new home in Cook County Iowa where most of his murders took place. At this time, Gacy started his own construction company named PDM. He was very successful in this business which also helped him disguise the monster he actually was. A building contractor by day and a serial killer by night. It didn’t take long before Gacy attacked another victim. During a business trip in Florida, he attacked one of his young employees in their hotel room and the boy beat on Gacy when they returned home. Gacy convinced people that the attack was for non payment of the employees work. Again, Gacy became involved in his community working for the democratic party and gaining credit by taking photographs with the then First lady Rosalynn Carter. Gacy even joined the Moose club where he founded his characters “Pogo” and “Patches” the clowns he dressed up as when he would perform at democratic events and even children’s hospitals. After this point in Gacy’s life, he began murdering young men and boys. It took a long time before they found out what he was doing because nobody would ever suspect a man that was so deeply involved in his community and people even looked up to him which helped him hide his evil side.

In Jeffrey Cohen’s “Monster Culture”, we can compare John Wayne Gacy to thesis number 3: The monster is the Harbinger of Category Crisis: “The monster always escapes because it refuses easy categorization” (6). Because John Wayne Gacy consistently involved himself in the community the neighborhood categorized him as a model citizen that every person should look up to and represent. But little did they know what Gacy was doing behind closed doors. He was finally arrested in 1980 for all 33 murders and was sentenced to death by execution. Gacy never felt any regret for what he did and even during his execution in 1994 his final words were “Kiss my ass” as he died on the execution table. Thesis 5: Fear of the Monster is Really a Kind of Desire, “The monster is continually linked to forbidden practices, in order to normalize and enforce. The monster also attracts”(Cohen 16). John Gacy even though dead has created a fascination to our society today. As one of the most notorious serial killers with films made about him and even the art that Gacy created has been sold to criminal fanatics around the globe. These monsters create a desire to want to get to know them as we develop interviews about their life and crimes. John Wayne Gacy falls into the most desired criminal of today’s generation.