Xenomorphs the harbingers of doom

The year is 2122 you wake up with your entire body restrained and up against a wall, glancing around in a panic you see the surrounding materials are not from a familiar origin. Your vision comes into focus as you look forward and you see rows of pods seeded to the floor in front of you. One of these pods opens up as you watch an eight legged figure slowly emerge out, its body exposed now you see its long tail. This being notices you and leaps at your face, grasping on to you,you struggle to breath and your vision fades to black. You wake back up again, pain in your chest and this creature on the floor with its eight legs and tail curled up. You have now just become a crucial part of a Xenomorphs life. The pain inside your chest is a baby Xenomorph just waiting for the moment to push itself out of your chest cavity, once it gruesomely  escapes your body it goes on to develop itself into one of three forms, Drone, Worker, or Soldier. The Queen is the one responsible for the birth of the eggs that release Facehuggers, the organism that wraps itself around the host’s face and pushes a Xenomorph embryo inside of the body. Xenomorphs are genetically engineered being made by a race called the engineers as we can see from the alien movie prequel Prometheus and alien covenant. The origin, life cycle, and behavior of the Xenomorphs are what make them a monster. The Xenomorph’s main function is to be a harbinger of extinction to a species or planet which falls under monster theory III the monster is the harbinger of doom. 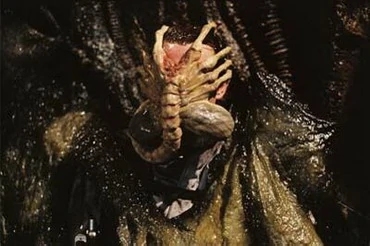 The Xenomorph’s life begins with the engineers. The engineers are a species in the Alien movies who are thought to be the creators of the Xenomorphs according to the movie Alien: Covenant. The movie goes to explain that the engineers made the Xenomorphs out of a black substance called Chemical A0-3959X.91 – 15, that allows DNA manipulation. “The pathogen is designed to infect all non-botanical lifeforms. All the animals. The meat, if you will. Either kill them outright or use them as incubators to spawn a hybrid form, highly aggressive.” (David Alien: Covenant) During the movie, Alien Covenant, we see David, an android, find an egg left behind by the engineers that contains a Facehugger. It can only be left up to speculation that the engineers are the ones responsible for the creation of the Xenomorphs due to the movie explaining that their species was very skilled in genetics. The engineers were ultimately killed by their own creations when a lone engineer released the black substance thus leaving the Xenomorphs open to decimate whatever came across their path. The very creation of  the Xenomorph ended up being the annihilation of the Engineers beginning their journey into being harbingers of doom.

The doom that the Xenomorphs bring can be seen in the first movie in the franchise, “Alien”.  Where the crew aboard the star ship Nostromo receive a distress call from another star ship. The crew of the Nostromo is awoken and then decides to board the foreign ship to identify the means of the distress call. Upon arriving on the ship one of the crew members comes across the same type of egg that was found by David in Alien: Covenant. The way the Xenomorphs continue their species and thrive is through infestation. The eggs the crew on the Nostromo come to find are the very things that bring Xenomorphs to life. A Xenomorph cannot be born without a Facehugger implanting the embryo inside of the targeted host. “When a Facehugger initially senses a nearby host, it will attempt to attach to and subdue them. Once in range, the Facehugger will leap towards the host’s face, often with alarming force and accuracy, and immediately wrap its tail around their neck and its digits around their skull.”(Xenopedia).

Once a Facehugger has finished the impregnation of the Xenomorph into its host the chest burster is then brought into existence. Chestbursters take traits from their host and obtain similar forms. For example when a Chestburster comes from a Yuatja, the Predators from the predator movies, like in the movie, “Aliens v Predator: Requiem” The Xenomorph gains mandibles on its jaws similar to the host race. Their advanced adaptability can only be speculated as a result as the engineers genetically modifying the Xenomorphs to be able to take over any race or planet. Chestbursters then form into one of three categories in the Xenomorph tree a Drone, Soldier, or Worker.

Once the chest burster goes into its chosen form the Xenomorph then plays into its own roll. Workers work on building the hive and strengthening the chambers of which a queen would reside, Drone is responsible for providing food for the Xenomorphs as well as harvesting hosts to increase the numbers of the Xenomorphs, and lastly the soldier is for protecting the queen and primarily focuses on fighting. The Xenomorphs can be identified by the grooves on their head.
The Aliens v predator game released in 2010 shows the difference with the soldiers having more grooves and fins on their head, while drones and workers have a more smooth head. Soldiers can gain ranks and evolve to become Pretorians; these types of Xenomorphs are the ones who will replace the queen in case anything happens to it. Through this game we also gain the information that the hive is called a hive because the queen is solely responsible for controlling the Xenomorphs with the hive mind mentality.

Xenomorphs amazing adaptability to any given situation is what makes them the perfect species to bring total annihilation to any planet. Their very creation led to the destruction of their creators. Their adaptability allowed them to survive past the extinction of their hosts. In the Alien colonial marines game we learn that the Xenomorph’s purpose is to consume or kill and that they will stop at nothing. If it were not for the united state military having to launch a nuke into Gunnison, Colorado during the movie AVP Requiem the Xenomorph infection on earth may have ended with the the total anahalion of all living things on earth to feed the never ending hunger of the Xenomorph. The very presence of even an egg can lead to a chain of events that will inevitably be the downfall of an entire planet. That is why Xenomorphs are the Harbingers of doom.