What has been your greatest achievement? Think about why you did it? We are not gonna share, I just want you to think about this, we will get back to it later. 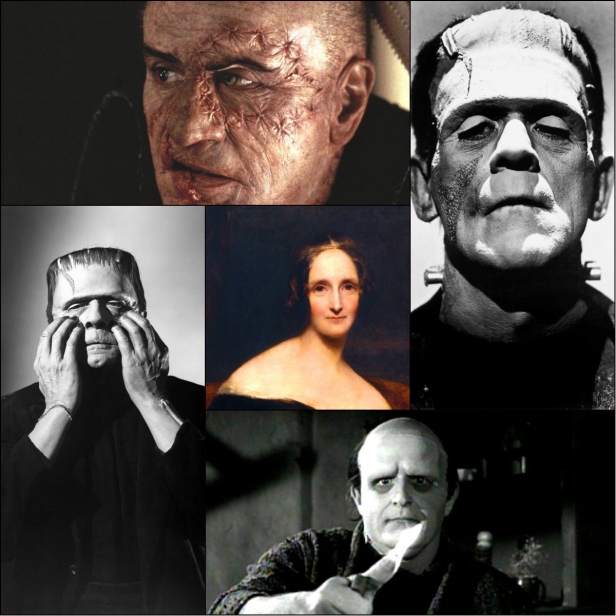 What does the title of the book mean? Frankenstein is the name of the Doctor that is telling us the story. What about the second part? What or who is Prometheus? What do you know about him?

What does modern Prometheus mean then?

Here are some monster notes from previous classes to help.

The question I want to consider now is: What does it mean to be human? Arguably, literary texts in charting human actions and emotions and so on, reflect back at us what makes us who we are? What makes us tick?

By looking at the monsters we create, we can learn what is means to be human and/or to be humane.

I want to focus on a passage from Chapter 5.

It was on a dreary night of November that I beheld the accomplishment of my toils. With an anxiety that almost amounted to agony, I collected the instruments of life around me, that I might infuse a spark of being into the lifeless thing that lay at my feet. It was already one in the morning; the rain pattered dismally against the panes, and my candle was nearly burnt out, when, by the glimmer of the half-extinguished light, I saw the dull yellow eye of the creature open; it breathed hard, and a convulsive motion agitated its limbs.

How can I describe my emotions at this catastrophe, or how delineate the wretch whom with such infinite pains and care I had endeavoured to form? His limbs were in proportion, and I had selected his features as beautiful. Beautiful! Great God! His yellow skin scarcely covered the work of muscles and arteries beneath; his hair was of a lustrous black, and flowing; his teeth of a pearly whiteness; but these luxuriances only formed a more horrid contrast with his watery eyes, that seemed almost of the same colour as the dun-white sockets in which they were set, his shrivelled complexion and straight black lips.

The different accidents of life are not so changeable as the feelings of human nature. I had worked hard for nearly two years, for the sole purpose of infusing life into an inanimate body. For this I had deprived myself of rest and health. I had desired it with an ardour that far exceeded moderation; but now that I had finished, the beauty of the dream vanished, and breathless horror and disgust filled my heart. Unable to endure the aspect of the being I had created, I rushed out of the room and continued a long time traversing my bed-chamber, unable to compose my mind to sleep. At length lassitude succeeded to the tumult I had before endured, and I threw myself on the bed in my clothes, endeavouring to seek a few moments of forgetfulness. But it was in vain; I slept, indeed, but I was disturbed by the wildest dreams. I thought I saw Elizabeth, in the bloom of health, walking in the streets of Ingolstadt. Delighted and surprised, I embraced her, but as I imprinted the first kiss on her lips, they became livid with the hue of death; her features appeared to change, and I thought that I held the corpse of my dead mother in my arms; a shroud enveloped her form, and I saw the grave-worms crawling in the folds of the flannel. I started from my sleep with horror; a cold dew covered my forehead, my teeth chattered, and every limb became convulsed; when, by the dim and yellow light of the moon, as it forced its way through the window shutters, I beheld the wretch—the miserable monster whom I had created. He held up the curtain of the bed; and his eyes, if eyes they may be called, were fixed on me. His jaws opened, and he muttered some inarticulate sounds, while a grin wrinkled his cheeks. He might have spoken, but I did not hear; one hand was stretched out, seemingly to detain me, but I escaped and rushed downstairs. I took refuge in the courtyard belonging to the house which I inhabited, where I remained during the rest of the night, walking up and down in the greatest agitation, listening attentively, catching and fearing each sound as if it were to announce the approach of the demoniacal corpse to which I had so miserably given life.

Oh! No mortal could support the horror of that countenance. A mummy again endued with animation could not be so hideous as that wretch. I had gazed on him while unfinished; he was ugly then, but when those muscles and joints were rendered capable of motion, it became a thing such as even Dante could not have conceived.

I passed the night wretchedly. Sometimes my pulse beat so quickly and hardly that I felt the palpitation of every artery; at others, I nearly sank to the ground through languor and extreme weakness. Mingled with this horror, I felt the bitterness of disappointment; dreams that had been my food and pleasant rest for so long a space were now become a hell to me; and the change was so rapid, the overthrow so complete!

Let’s return now to the quick write. What was Dr. Frankenstein’s greatest achievement? Most would say it is the monster.

In small groups, look at the seven theories to see which apply to Frankenstein and his Monster.

Here is a scene from the 1994 film, Mary Shelley’s Frankenstein.

Dr. Frankenstein is trying to do a great thing: he wants to save humans from dying. Why then is his greatest achievement, life, an abomination, a creature, a monster?

Why does he call it a monster? It was just created and born by his hands. It has not done anything yet to be considered monstrous. So what makes it a monster? Is it actions that make someone a monster? Or can it be just the way you look?

Why does he turn his back on the monster? What theory from Cohen would help us understand why the creation is a monster?

Who then is the monster? If you had a baby that was born with a physical or mental handicap, would you turn your back? Would you be horrified? Or would you love it just the same or even more because you know that life is hard and people are mean.

What would make you a monster? We just saw that it is not necessarily actions. That is how we usually think of monsters in our modern context. When someone does something that we consider wrong we will call them a monster.

What would it take for you to be born a monster? Could it be your look? Handicap? Disfigurement? Color of your skin? Religion? These are all things we have done to make monsters. What one have you seen?

Connect at least two monster theories for today. Find a quote from each of the monster theories that you think apply and connect it to the selections from Frankenstein and the video we watched.

Use the quote sandwich to show the connection.

The concept of dragons evolved with people’s needs and desires. It follows the first of Cohen’s Monster Theses: The Monster’s Body is a Cultural Body. “The monster is born only at this metaphoric crossroads, as an embodiment of a certain cultural moment…” (Cohen 4). Each individual culture molded the dragon to its own desires and fears, be it Christian fear or Chinese mysticism (Quintero).